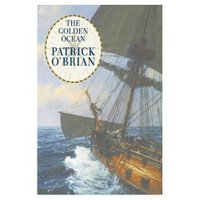 Some time ago, I talked about the voyage of Commodore Anson into the great South Sea. Here's what I said:

In 1741, Commodore George Anson set sail from England with five ships and a total crew of approximately 1400 men. He had orders to sail to South America, map some territories and harass Spanish shipping. He had a diasastrous voyage and returned with one ship and about 500 men. But along the way he captured prizes worth about £400,000.


Well, Patrick O'Brian thought it would be a capital idea to write a novel based on the adventures of two young Irish lads who sign on for Anson's voyage. Luckily, and I don't think it's giving away too much to say this, they have a fondness for lemons. This is a lovely precursor to the Aubrey-Maturin books, and it only makes me sad and wistful to have finished it so fast, bringing me ever closer to the end of O'Brian's works.
Posted by Trish Byrne at 10:10 pm