The Time it Never Rained 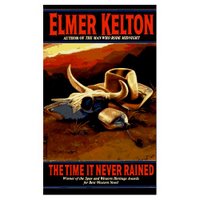 Some time ago, when William saw Flight 93, he said that it felt so real that when he came out of it, he wanted to ask people if they had heard about that plane crash that just happened.
When I finished reading this book about the effects of a long drought on small Texas ranchers, I was walking to work and it started to rain, and I felt a huge relief. At least the rain is here, I thought.
The main character in the book is Charlie Flagg, an old-fashioned (some might say slightly Libertarian) smallish rancher who works some leased land and some land of his own. He keeps a mixture of sheep and cattle and he has a wife and a son who wants to ride in the rodeo, and he's friends with his neighbours and the Mexican family who work for him, and everyone does okay. But then the rain doesn't come. And it keeps not coming. And latent tensions bubble to the surface. Racism, sexism, town against country, big farming against small ranching. And through it all Charlie Flagg refuses to take money from the government, refuses every handout, refuses to go "into the programme", and gradually the countryside dries up and a whole way of life starts to blow away.
There are elements of Steinbeck in here. And, for someone like me who has never even spent much time on a farm in Ireland, never mind a Texas ranch, it's almost like reading science fiction, because it's a totally alien environment. The book may as well take place on Mars, for all I know.
Sure, some of the lessons are delivered in a slightly heavy-handed manner. For example, the manager who works for one of the huge farming conglomerations may as well have a long black mustache that he twirls periodically. But on the whole this is a great, involving book. I highly recommend it.
Posted by Trish Byrne at 10:25 am