Imagine if, in Groundhog Day, Bill Murray had had to, instead of becoming a nicer person, solve a mystery in which he was being framed for the murder of an assistant district attorney. Now imagine that instead of Bill Murray, it was Taye Diggs. Well, that's Daybreak. It's a fun programme that they had on in the U.S. while Lost was on its ten-week hiatus, and now it's being shown in the U.K. on Bravo.

We've been watching it, partly because it's on telly, partly because it has Adam Baldwin in it, and who doesn't love him? And partly because all our U.S. shows are on hiatus again for another few weeks. I really liked the non-fucking around of the first episode, and the fact that Taye Diggs' character does not spend ages wondering why this is happening, but just tries a different approach to solving his problem every time he wakes up in the same day.

There is one thing that really annoys me about it, though. In the very first episode, the first thing he does when he gets up in the morning is to go to his apartment, having spent the night at his girlfriend's. His dog is waiting in his apartment for him to get back so it can get outside and, presumably, take a shit. It has, again presumably, been sitting around since some time the previous evening waiting for him. I know this because one of the neighbours says to him "your dog has been going crazy in the apartment", by way of a CLUE. To me, though, this just means that every time he wakes up on this day and doesn't go to his apartment, his poor dog has to sit there all day long, unfed and unwalked. Forever. That seems kind of mean.
Posted by Trish Byrne at 9:19 am No comments:

It was my birthday a little while ago, and I got nice presents, including a new lens for my camera and dinner out and the theatre and HMV vouchers and nice chocolates and CDs of Durutti Column and Talk Talk.

But sneakily, my favourite things I got are these two cards, one from Ed and Claire and the other from Eoghan. The one Eoghan sent is from the New Yorker collection and would be funny to anyone, but Claire chose the other one just for me, from the Punch collection. See if you can guess which is which.
Posted by Trish Byrne at 9:13 am 1 comment:

Ha! They don't know they're being funny

Thanks to Big Boss for sending me the link to this. You can get your context from here, and you can read a wider selection of comics hilarity here (which I think is where the first guy got his from).
Posted by Trish Byrne at 1:51 pm No comments:

... how good the Eurovision used to be.

Watch out for Glenn Wool on the left!

Posted by Trish Byrne at 6:19 pm No comments:

It was supposed to be my job , according to Queenie, to give the Scots a good kicking for not letting us win the Six Nations at the weekend, but sadly I failed to do my job, because I missed my flight. I hit that weird little pocket of everyone piling into Dublin airport at the same time and everything going slightly wrong and managed to miss check-in by about five minutes, which of course means missing the flight completely, because you can't check in online for the Glasgow flight, even if you've no baggage. So, thanks, mister drunken arsehole (I assume) who drove precariously in the fast lane in front of me on the motorway at 60mph between Balbriggan and Donabate, and who I was afraid of overtaking on the inside for fear you would choose that exact second to pull into the inside lane.
Thanks also to the good people of the long-term car park, who had one single barrier open when I arrived, so I had to sit in a queue of cars to get my ticket, and then park in Zone Y.
Thanks very much to the driver of the bus from the car park, who didn't notice that our bus was totally rammed and that we were all sitting or standing there, waiting to leave, for ten full minutes before a passenger got off the bus and shouted at him to get us to the terminal so that we could get our flights, please.
And a final thanks to the good people at Aer Lingus, who have done away with all their actual check-in desks, and now only have Bag Tag 'n' Drop desks, so that if your flight has just closed and the machine tells you so, you have to go to the Ticket Sales desk to plead to be let on, and there's only one of those, and the queue was, I am not exaggerating, all the way to the door of the Departures section. So I gave up and went home again, stopping to pay €8.50 in parking fees for the privilege of parking for half an hour.

Still, at least I went to the correct airport, unlike some people in my family who were also flying that day.

Also it was the perfect excuse to start reading Master and Commander again.
Posted by Trish Byrne at 4:45 pm 5 comments: 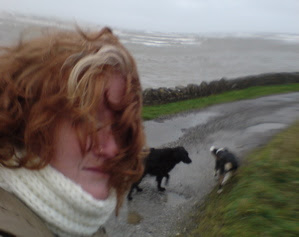 I pity anyone flying across the Atlantic in this weather.

Poor Mister Monkey.
Posted by Trish Byrne at 11:11 am 1 comment: 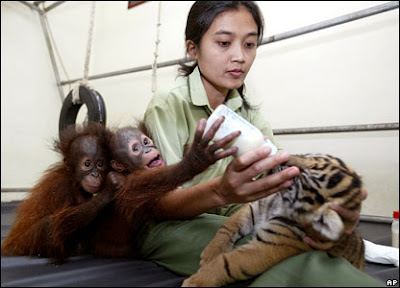 Okay, okay, I saw it on Ian's blog, but holy crap, look at the cuteness of this.

This is my favourite picture of the lot. "I'm helping! I'm helping! Don't kill me in three months!"
Posted by Trish Byrne at 8:51 am No comments: