If you've never met me, you'll perhaps be unaware of the fact (but unsurprised to learn) that I am a person of fatness. And not, like, regular muffin-top fatness, but actual proper fatness.

Long story short, I'm embarked on the process of doing something about it, for what I swear is going to be the last time. Three weeks into this current effort and everything is going fine, except that my counsellor (I would say "diet lady", but I'm trying to think of the way I eat now as basically the way I will eat for all time, because that's how you do it, really) has set me a task that I'm finding quite difficult.

Why is that hard? Because I get as far as this:

1) Have a nap.
2) Daydream about telly people I have crushes on.

And that was the list I was going to go with until I started giving this some serious consideration, just to keep the counsellor happy (I know that's not how counselling works, but sometimes doing it any other way creates too much anxiety, which makes me want to eat). Nevertheless, that is a crap list for someone like me. I don't like being rubbed or gunked or handled except for medical or conjugal purposes, so that's all out. And I don't like baths, they are boring. And I was hoping that this new, healthier eating lifestyle would result in me buying less crap, not more, different crap.

So what are my treats and rewards?  This was the list I finally came up with, after some careful consideration.

Everyday treats:
Big treats:
That's all the things I can think of for now that could be considered equivalent to things like eating half a packet of Viscounts, or getting a Chinese in and having chips instead of rice, or the other things that I have always considered treats but which, let's face it, haven't turned out to be such treats in the end. Obviously there are bigger things, like going places for the weekend and so on. But I'm pleased with that start. It gets me away from the traditional "women be shoppin' and smearin'" idea, and that's important.

And now I've done my homework, I deserve a little treat. So do you, if you've read this far.

As you can see, we still have the puppies.

In the last day or so, though, they've come on hugely in the independence stakes. They're playing with each other a lot more and are a lot less dependent on cuddling up to a human for comfort. This is good news, because it means I don't have to wait for them to be fast asleep in order to leave them and go off to do other things, such as showering and doing actual work for which I get paid.

They do still like a lap to lie on when they're actually ready to go to sleep, though, and will cry for one of us to come in and sit with them for a few minutes while they drop off. That's fine.

Worms appear to be abating as well. Everyone's belly, including Widger's, seems to be taking on a more normal shape, and everyone's got more energy.

They'll be starting tiny puppy vaccinations this week, which basically means getting teeny tiny doses of parvo vax in order to ensue they don't get accidentally infected before they are old enough to have their proper vaccinations. This will necessitate many visits to the rescue's vet, who is 45 minutes away from here. Oh well. There goes this weekend as well. 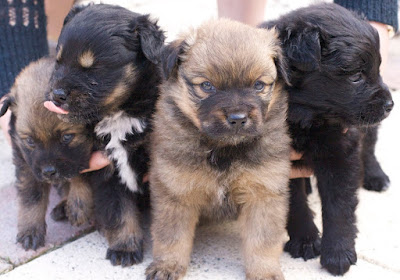 They are so lovely though, and it's lovely to see them getting stronger and more confident every day. I'm glad we took them on. Puppies were always such a mystery to me before, and I'm glad we had a relatively easy and healthy litter in first to practice on.
Posted by Trish Byrne at 12:03 pm 4 comments:

We now have four puppies.

When the rescue was originally contacted about the wee yokes, they were told that the puppies were between eight and ten weeks old, which is a good age to start separating them. So one of the other volunteers agreed to take one, and I would take the others. But the mistake was discovered and rectified, and now we have all the puppies together with us.

They're visibly growing every day, if not in size, in health and confidence. We had them out the back yard this morning for about five minutes and they ran around barking excitedly and trying to eat weeds, which is a far cry from the three terrified mites I got on Friday. They're also separating into two separate groups to sleep, or even napping by themselves, which they wouldn't do unless they felt safe.

We have named them. 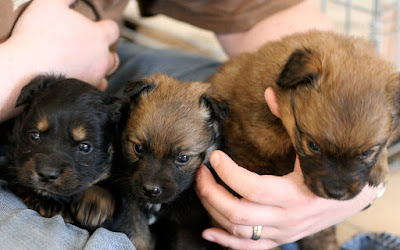 We've called the other one Tarka, but I don't have a picture of her yet. She's very collie-looking.

Posted by Trish Byrne at 9:46 am No comments:

Because you asked for them

Here's littlest pup calling the others back to bed because he's sleepy now.

And here's biggest pup stridin' out.

So much for today's plans. My intention was to make the most of my manager's absence from work today (I am going to work tomorrow instead) to do my supermarket shopping and visit my friend in the hospital. She has had some fairly serious oral surgery and is going to be in hospital for at least a week, so I wanted to go. I was all set. Walk the dogs, come home, have a shower, take the bus to Dublin.

Then Trixie vanished halfway through the walk. Figuring she'd gone down a rabbit hole again, I waited around for her, but she didn't emerge. So I walked back to where I'd last seen her. No sign. To cut a very long and panicky story short (in which our heroine dashes about the sand dunes clutching at strangers and begging them for news of her feeble one-eyed dog) I eventually drove all the other dogs home in order to get them out of the heat and headed back out to retrace my steps yet again. Ten minutes of walking along calling out her name produced the desired result. Like the Shopkeeper, Trixie appeared. She must have been exhausted, poor yoke, because as soon as she got over beside me she flopped down in the shade of a clump of grass and pretty much fell asleep.

There may have been crying, but to protect Trixie's dignity I won't say who shed the tears.

Texted our rescue coordinator to say "found her!" She said, "great. Do you know anyone who could take some puppies that have been dumped in a box in Termonfeckin?"

Seratonin levels were high, plus I'd never been in charge of puppies before. I volunteered to take them. They were eight or ten weeks old, I was given to understand. It would be jolly.

Turns out, they're actually only about five or six weeks old, and strictly speaking too young to be away from their mammy. One of them is bold as brass, one is middling, and the runt is, well, a bit runty. He didn't eat anything at the vets. "Keep an eye on him," I was told. I worried immediately. I looked at them in their box on the kitchen floor. They cowered and trembled. Well, you would, wouldn't you?

A little while has passed now, all the adult dogs have solidly inspected the box of delights and proclaimed it less interesting than the boxes that come from Zooplus, the puppies are all fed, even Runty, and everyone's asleep. I've got a free hour before it's time to start walking and feeding all over again. The hospital visit will have to wait till another day.

Sorry the photos aren't better. The puppies won't come out of their clump.
Posted by Trish Byrne at 5:49 pm No comments: