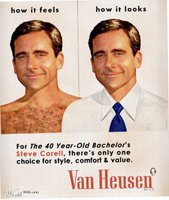 It seems I am the last person in christendom to see this film. If you haven't seen it, you should. The fact that it has Steve Carell in it might make you believe that it's going to be like Dodgeball or Anchorman, so if you don't like that kind of film, you might have been put off. But this isn't like that. It's very old-fashioned, the people in it are real characters and they don't behave in a totally unrealistic manner that makes you wonder if they could actually keep themselves alive in a real situation. And although the film is, and I don't think I'm giving anything away here, about a 40 year-old guy whose friends find out he's a virgin and try to make him stop being one, it's not an all-out see-how-many-women-we-can-degrade-with-boob-humour jokefest. I really, really enjoyed it. And having seen some of Steve Carell's stuff on The Daily Show's ten-year retrospective, I have decided he is my new hero.
The photo, by the way, comes from this fun site. I like the modern Marilyn Monroe in particular.
Posted by Trish Byrne at 9:56 am