The Ex-Wives by Deborah Moggach is a very pleasant read. It has some excellently observed family material in it, and is very funny. Although the story is slight and predictable, the book is a real page-turner. Most enjoyable.
Posted by Trish Byrne at 1:44 am No comments:

7:What kind of person is Magnus Mills?

His books are just so strange. And his writing has this amazing childlike quality to it. In The Scheme for Full Employment, Mills has created a seemingly simple tale about men who drive vans full of important equipment from depot to depot. They seem to live in a world that's as wholesome as Camberwick Green or Trumpton, but, as always with Mills' books, there's a claustrophobic feeling that all is not as pleasant as it appears on the surface.

One of Magnus Mills' great strengths is being able to take the most boring existences and make them seem fascinating, or at least make you understand how the people who do these jobs can fall under their spell and become unable to see anything outside them.

A very quick read, this book, but that doesn't mean that it's slight.
Posted by Trish Byrne at 4:42 am No comments:

Short, sweet. Not the kind of thing I normally go for, given the anachronisms (how can a pirate's grimace be reminiscent of Elvis? Elvis wasn't around) and the is-it-for-kids-or-for-adults uncertainty (like Shrek), but Gideon Defoe's The Pirates! In an Adventure with Scientists is just very funny and doesn't outstay its welcome.
Posted by Trish Byrne at 1:23 am No comments:

If Carlsberg were smart, they'd buy this

and they'd turn it into their new ad. Carlsberg don't make the news, but if we did, it'd probably be the best news in the world.

It's just lovely. Thanks to ILX for another great link.
Posted by Trish Byrne at 5:36 am No comments:

At the end of another weary week

I would have to be really desperate for money to go back to working full time. Today, for instance, I got to watch Linus and Killick (who we suspect of being gay for Linus) run into the glass back door and bonk their little heads.

Then I could see my neighbour getting undressed in his bedroom. Okay, so I could only see the top half, and it wasn't like I was evaluating him or anything, it was more just the amazement of sitting at my desk on a Friday morning, able to see people in their bedrooms.

If I could only figure out something profitable to do with little danone yoghurt pots, I'd be quids in.
Posted by Trish Byrne at 2:34 am No comments:

Despite the Guardian quote on the front claiming that this book is "unputdownable", I will now put it down. Not that it's bad, exactly, but it's definitely second string historical fiction. When you read Patrick O'Brian and Mary Renault, you come to appreciate a really good historical novel, and this is not one.

It's okay, don't get me wrong. But the astronomical hook she tries to hang it on is not that interesting, the plot is very standard and really quite modern, and everyone seems to be having an awful lot of sex that's neither enjoyable or germane to the plot. It's not even sexy.

Also it turns out that a lot of London did not look like it does today. There are a lot of descriptive passages that take great delight in reminding you that there were farms and fields in London in 1795. I don't care.
Posted by Trish Byrne at 7:30 am No comments: 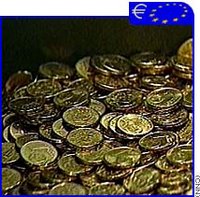 Everything has ground to a halt today, I've got some sort of muscular injury to my neck and shoulder area. I blame the several hours I spent on Friday night and Saturday morning counting several hundred euros in teeny tiny coins, not to mention having to heft the lot around. Still, there is something mesmerisingly soothing about counting coins. A lot of coins.
Posted by Trish Byrne at 1:28 am No comments:

3: not just a padded stool

Lords of the Horizons by Jason Goodwin is a whirlwind history of the Ottoman Empire. Goodwin bravely attempts to dispense with a strictly chronological telling of the major events of the empire, choosing instead to structure the book thematically, but it doesn't always work, especially since, like most royal families, the Ottoman sultans had a tendency to all have the same name, so unless you have a fantastic ability to grasp the timeline immediately, you'll find yourself diving for the chronology at the back of the book fairly often. That said, the stories he chooses to tell are great, and they do cast some light on an empire that is essentially - for most people in Ireland anyway - nothing but a funny name for Turkey at the start of the First World War. He goes into great detail about the financial affairs of the empire, about the succession rites of the Sultans (initially, when a new Sultan was appointed, he killed every one of his male relatives. Later, they just kept them locked up in the harem surrounded by barren women and eunuchs. And they all went mad, unsursprisingly enough), the fact that they didn't have clocks, that the armies had marching bands but didn't march in step because the roads were too bad. These are the kinds of details I like to have in my mind about an empire.
Posted by Trish Byrne at 7:27 pm No comments:

2: Funny, but not that funny

Sure, it's funny and all, and occasionally very funny, but it's not quite the unmitigated chuckle-fest I was led to expect. However, I do like the way the book is put together, seeing as it's a collection of essays, articles, and epiphany style short stories, it does build up very well into a picture of a man and his family that's like a very economical version of A Heart-Breaking Work of Staggering Genius.
Posted by Trish Byrne at 7:00 am No comments:

Thanks to a weekend of NO TELLY, Virgin Earth is now, er, deflowered. What's it like? Oh right. Well, it's Philippa Gregory's second book about the Tredescant gardening dynasty that served the Stuarts right up to the Civil War and beyond. It's a sweeping story of that switches between England and Virginia and deals with themes of freedom, land ownership, the right of people to choose their own destiny, and gardening.

The main character of John Tradescant is a highly likeable one, and even though you might suspect that his senseibilities are a little more 21st than 17th century, at least Gregory puts a lot of work into showing you how he got that way. There's plenty of great research gone into this, and if you want to know how the Powhatan people lived before they were driven out by the British, or what it felt like to watch Charles the First tried and then beheaded, this could be the historical novel for you. Most enjoyable.
Posted by Trish Byrne at 2:38 am No comments:

And we're not off to an auspicious start. My filofax tells me that this time last year I had already read three books. So far this year, I'm still reading the first. Virgin Earth by Philippa Gregory is not one of your sprinting books. It's really more of a distance read, clocking in at over 500 pages of small and closely packed type. I'll have to see how I get on over the weekend, but I reckon I might have to add a few daft thrillers into the reading list in order to keep my average up for the year.
Posted by Trish Byrne at 8:50 pm No comments: