1599: A Year in the Life of William Shakespeare 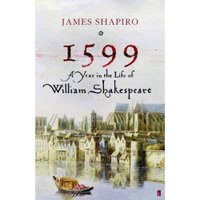 This is a great book. James Shapiro talks about the English campaign in Ireland, the summer of the invisible Armada, proto-musicals, translations of Tacitus, the death of chivalry and the glimmerings of globalization, theatre companies composed entirely of little boys, the changes in the acting profession, the work of publishers, and the effects that all of these things may or may not have had on the work of Shakespeare, specifically on the plays he wrote in that year (which included Love's Labor's Lost, Julius Caesar, Henry V, and oh yes, Hamlet). He is very clear about where he's speculating and where he's employing facts, and he really opened me up to a fresh understanding of theatre of the time.
Just a great book. There's no point in my trying to recount any of the many hundreds of anecdotes, but trust me, they're in there.
Posted by Trish Byrne at 10:12 pm