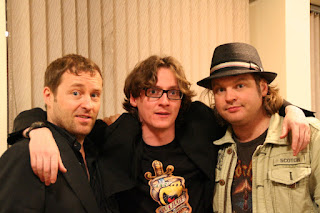 This was great, and hopefully will become an annual event. More about it when I have time, but thanks to those who came along and supported it, and really, four top-class comedians for €20? You can't say fairer than that.
Posted by Trish Byrne at 12:43 pm 3 comments: I love to have a Philippa Gregory book to read when I'm going anywhere. They're easy to get through and I don't mind leaving them behind if necessary. So I was glad to pick up A Respectable Trade in the bookshop for €4, but almost put it down again straight away, because it seemed, um, exploitative.

The story concerns a lady of the upper classes who is penniless and unmarried. She ends up marrying a Bristol slave trader, who has this idea to bring slaves into England, have her train them as fancy house servants, and sell them on at a vast profit. Unfortunately for him, his wife develops an, um, relationship with one of the men (which is, of course, the bit I found a bit yeesh) and his business more or less collapses and he goes a bit mental.

On the whole, the book is simplistic and a bit slavery-is-bad-DO-YOU-SEE? But there are some lovely touches in it. Gregory reminds her readers, for one thing, that the kind of investment and trading behaviours she talks about in this book (and has, as is typical of her, meticulously researched) are the kind of behaviours that the men in Jane Austen's books would have been engaging in when not flitting around the countryside saving ladies from consumption. The ridiculous social climbing and the horror of debt that seemed to be a feature of the merchant class in the late 1700s are also well sketched. Overall, I'd have to say her intentions are good, her detail is excellent, but her plot and characterization are weak. The book wasn't quite as cringey as I expected, though.
Posted by Trish Byrne at 9:52 am No comments:

In case you missed him on Graham Norton's show, saving Preznit Bartlett from certain PAINT, someone has handily put the whole thing up on YouTube.

(You know you can embed these nowadays)
(Yes I know, but I don't like doing that)
Posted by Trish Byrne at 10:36 am 1 comment:

Woody has had his balls off

It's true. If I was better with computers I could probably make some sort of mock up of the poster for Face Off, but call it Balls Off and put Woody's face in it instead of John Travolta and Nicolas Cage's faces. But I'm not good with the graphics, so you'll just have to accept the tortured joke instead.

So now Woody is wearing a buster collar and banging into all and sundry. My legs are a mass of black bruises, Milo and Cody spend most of their time hiding, and the bin gets knocked over about 50 times a day.

Having a labrador with a buster collar in your house is a bit like having a poltergeist you can see.
Posted by Trish Byrne at 9:12 am No comments: