It's almost more annoying to watch a film that could have been good, and has flashes of really good things in it, than to watch one that's just crap from start to finish. Because with a film that could have been good, you give it a lot more thought than it maybe deserves, and you see ways in which it could have been improved in order to make it the award-winning triumph its makers maybe hoped it would be instead of a little-seen labour of love that takes three years to get released.
The film concerns two couples: Jake & Zoe and Becca & Chester. The death of Jake's dad takes him back to Finsbury Park where he meets Becca (or B), who works in her cousin's cafe. They are two trapped and wounded people who seek solace in each other, but also use each other to punish their respective partners. It seems pretty simple. The problem is that the story is not remotely balanced. Paul Bettany, who plays Chester, admits as much in his interview on the DVD. He says that he was lucky in a way to be playing Chester, because Chester has the most interesting predicament. He used to be a boxer, but since he had his stroke he's become an agoraphobic and angry burden on B. She loves him, but he keeps pushing her away while simultaneously guilt-tripping her into remaining with him. It's strong stuff, competently acted by Doraly Rosa as B (who is ridiculously good-looking, as well), and as for PB, well... 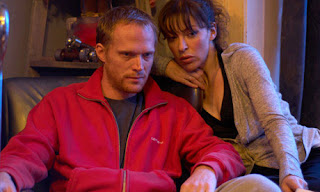 Look, I know you know I like him. But honestly, really, I'm not kidding you, he is Gary Oldman good in this film. And I know a lot of that is because he's got the really juicy part. But god, he looks and sounds convincingly wounded and seedy and just finished.  The dialogue in the scenes between Chester and B is also believably natural in a low-key, repetitive-to-the-point-of-being-boring way.
By contrast, Jake's  predicament is that he is haunted by his family and his relationship with his parents in some way that's not really clear to me. Something to do with a traditional Jewish upbringing, I'm guessing, given that one of his first actions after attending his father's funeral is to go to a cafe, still wearing his yarmulke, and order a bacon sandwich. DO YOU SEE? There's also something about his mother having had an affair? The trouble is that this is all told rather than shown, and frankly not really all that interesting, even if his mother is Harriet Walter. Also he is trapped by Zoe in some way that's not very clear either. Is she too middle class? Not Jewish enough? I didn't get it. She seems nice, and I think I was expecting her part to be bigger because, hey, it's Olivia Williams, and why would you get Olivia Williams in if you weren't going to give her anything to do?
So, if it was me, I'd have shifted the centre of the story away from Jake & Zoe onto B & Chester, with some Jake on the side. I'd have expanded her family's roles (her aunt is Rita Tushingham, for god's sake), got rid of all of Jake's back story, thrown in a few fucking jokes just because there's only so much drear you can take, and bish bash bosh, job's a good 'un. A better one than this, anyway.
However, in case you think there's nothing to like about it if you don't rate Paul Bettany, it does at least make a nice antidote to Working Title England as depicted in movies like Notting Hill and, oh look, Wimbledon. This movie is like the anti-Wimbledon.
It also captures pretty well that feeling you have when you walk around the bits of north London your friends live inand wonder who else lives in these nothing little houses and flats and what do they do with themselves all day? Who are the people who work in these anonymous local cafes and carry thin plastic bags around with them everywhere they go? Well, here are some of them. Happy now?