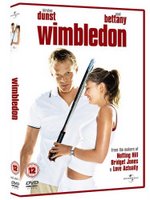 Either Americans really do think it's cute when attractive, well-spoken English men say "shit" and "bugger", or English film-makers just think they do, because here's Paul Bettany doing it all the way through Wimbledon. And looking fine in Fred Perry tennis whites to boot.

There's not a lot to say about this film. It's not that funny. It's not that well written. Apart from the carefully orchestrated rain that stops some crucial play, it takes place in that Working Title England where all parents are irascible old sweeties, England in summer is always sunny and warm enough for wearing floaty dresses, and international tennis stars in the middle of the most important tournament of their lives think nothing of motoring down to Brighton for the day. But it is quite sweet and it has a whole rake of immensely likeable actors in it, and Paul Bettany looking very nice in his tennis whites. Wait, I already said that.

He does really look very nice in his tennis whites, though.
Posted by Trish Byrne at 7:26 pm