A special treat for me: Margin Call and Shame at the Screen Cinema

Excitement abounds in Dublin artsy circles (alright, my Twitter stream, but that's got more people from Dublin's artsy circles in it than I've any right to) because the Lighthouse is reopening.
This is good news, of course, but I've never been a Lighthouse person. Even in its original home up on Abbey St., the Lighthouse was never my stomping ground. I've always been a Screen girl. Ever since it stopped being the Metropole and started being the home of first-run, mainly American, slightly left-of-centre movies, the Screen's been my spiritual home. I remember bunking in from She's Gotta Have It to Raising Arizona with my brother and his friends, and my brother almost having to be stuffed under the seat because he was laughing so much he was disturbing the other punters. I went there on a weekly basis in my second year of college because I had a rich friend who was prepared to pay for my ticket (and for a naggin of vodka to split between our small Cokes) just to have someone to go to the cinema with. We laughed a lot more at Talk Radio than I think you were supposed to.
Moving to the country and generally falling out of love with the city and chatty people in the cinema meant a parting of ways between me and the Screen for a while, until I started following them on Twitter and became a bit more organised about going to see things. At Halloween last year they ran a lovely print of Don't Look Now, and there was no yap at all during it. Result. I decided to make an effort to go to more films there in 2012.
So, after the slog of being ill over Christmas and New Year and constantly having to talk to people (even though those people were the ones I love most in all the world), I decided to treat myself last Friday and took myself off to the Screen to see Shame and Margin Call on their opening day. Perhaps not the obvious choice for a double bill, but they've more in common than you might think: both low-budget New York movies, both portraits of a short but pivotal period in the lives of the protagonists, both examining that moneyed lifestyle and frantic duck-paddling that goes on underneath it. 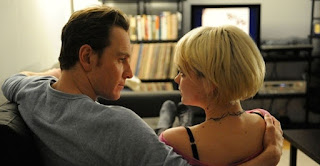 I don't have a whole lot of insight to add to the mountain of praise that has been heaped on Shame, but I would say this: you know the way that Russell Crowe and Ridley Scott think they're a great partnership? They have nothing on Steve McQueen and Michael Fassbender. Fassbender seems to be able to do anything McQueen requires of him, and McQueen returns the favour by making Fassbender look like a work of art even when he's not behaving like one. It's not a perfect film, and I wouldn't go and see it with your mam if I was you, but it is both entertaining and artistic.
Margin Call is a bit more functional. It has a story to tell and it tells it. Some of the characterisation is a bit basic: this one loves his dog, this one has kids, this one is trying to give up smoking (this handing out of the identifying attributes always reminds me of the stories about the Magnificent Seven, how McQueen (the other one) would only relinquish top billing if he was given the rifle, or something), but that's a small quibble.
I've heard other reviewers complain that the top brass keep asking for things to be explained to them in simple terms--"as if you were speaking to a child, or a golden retriever," Jeremy Irons says at one point--because wouldn't these guys know the jargon? But of course, that was part of the problem. The younger guys, the Penn Badgeleys and Zach Quintos, came up with new algorithms and bundles that the people above them didn't understand, but they let the money ride on them anyway because hey, they were covered either way. 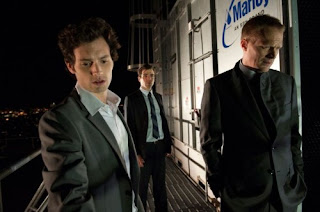 The limited number of sets, the fact that the action takes place across a single night, and the coded conversations between vaguely threatening, suited men, all combine to give the feeling of a David Mamet play, or something by Pinter. Do not, whatever you do, take someone to this movie who insists on knowing every single thing that's going on at all times, because the constant whisper of "what are they talking about?" will drive you mad. You don't need to know what they're talking about. Half of them don't know what they're talking about. What the film is trying to get across is that these are just people. They might not be particularly good people, but they're not particularly bad people either, and rather than hating them personally, you might want to think about changing the system that rewards their behaviour.  I'm not sure I believe that, but I'm prepared to accept that others do. Unsurprisingly, Kevin Spacey, Paul Bettany, Demi Moore, Stanley Tucci, and Jeremy Irons are all great in this movie. I wasn't even particularly surprised by how great Zach Quinto and Penn Badgeley were. Simon Baker, though, his performance kind of snuck up on me. I've always written him off as one of those pretty faces whose popularity I don't quite get, but he was really sly and hard and imposing in this. Well done, everyone.
(See how I didn't just talk about Paul Bettany? See? I am getting better.)
Also: did you know the Screen sells wine now? And that you can see a movie there for less than €7? Well, you can. And you should.
Posted by Trish Byrne at 2:24 pm

There are things that I miss about Ireland and heading off to the IFI or the Screen cinema was one of them ... You can go to the cinema anywhere in the world - I know that- but they are special