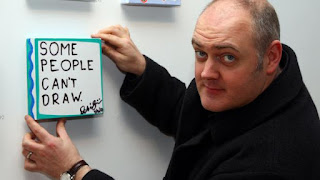 Giddy, is the best description of Dara's mood last Wednesday as he took the stage in Vicar St. Downright giddy.
Mind you, I think I'd be giddy too if I'd just finished presenting three live television shows on one of my favourite subjects in the world and was selling out most gigs on my current tour. Dara says himself that he knows this show lacks the single idea that has given some of his previous shows an obvious hook--the neutrinos from two years ago, the Milky Bar kid, the Gillian McKeith stuff--but it is still a special show, and it did seem to have a clear theme from where I was sitting: Dara's turning forty and he's having a little stocktake.
Milestones are mentioned at several points during the evening. When he lines up his helper elves in the audience, for instance, he reminds everyone that he's been doing this job for nearly twenty years now and so has only a hazy idea of what it is that real people's jobs actually entail. And how could he have? Even at his level of fame, life has become an odd round of being photographed, imprinted on, ignored, or complained about. Not that he minds any of this, really. It's just another phenomenon in the universe for Dara to study and try to make sense of and get a laugh from, along with racism, astrology, the logical conclusion of the necessity for balance on television programmes, last summer's riots, whether we should just put all our resources into girls from now on, what is really the best thing to say to a burglar who breaks into your house at three in the morning when you're having "adult time", and bullshit modern nativity plays that feature characters from Toy Story alongside proper biblical figures.
This is all suffused with the kind of unapologetic intellectualism, massive doses of cheery swearing, and surreal asides that (since we're taking stock of almost twenty years of a career here) used to remind me of Eddie Izzard but have become as ingrained a part of Dara's shows as his callbacks to his helper elves in the audience (I love how people now lean forward to watch him do this, as if he was going to do a magic trick). But this time he also managed to include a couple of wistful stories about his youth that, for me anyway, gave the second half of the show a particularly personal feel as well as reminding people of just how far he has come.
So, yes. See the show if you get the chance. It is honkingly, snortingly good.
Posted by Trish Byrne at 11:26 am