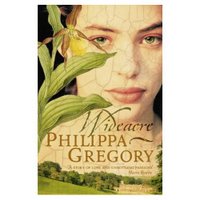 Which I also read during my weekend of chick lit and rom com hell. This is a cut above, however. It's a bit like Flambards or Gone With the Wind, only with a much darker edge. The story follows a girl who is born onto the Wideacre estate and loves it so much that she learns every single thing there is to learn about it, its people, its crops, wildlife, so on and so on. But of course she is a woman, and this is eighteenth century England, so there's no way she can ever own or run her beloved estate. That honour is left to her ever-so-slightly rubbish brother, who is very attractive, but gullible, and cursed with something of a kinky streak that saw him getting kicked out of public school.

So the girl decides to do everything in her power to ensure that she and her heirs get to keep hold of the place she loves. Of course it all goes horribly wrong, how could it not? Interestingly though, the thing that undoes her is not really her shocking incestuous relationship with her brother, which after a while takes on the characteristics of just another chore that she must perform in order to get her way, but her lack of business training and her inability to deal with the mounting debts that are being incurred because she wants to buy out the entail on the property. As usual there's some excellently researched background detail, and even the irritating style that Phillipa Gregory sometimes has doesn't get too much. I wouldn't go giving this to your Mam for Christmas or anything, but it's a thumping holiday read. Much, much better than 90 percent of the chick lit I've read in my life. All the words are spelled correctly, for one thing.
Posted by Trish Byrne at 2:57 pm