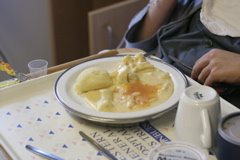 Yum yum, huh? This is, sadly, what poor ComedyB Jr. had for his dinner last Sunday. He is in the hospital, you see. Apparently last Tuesday he started doing the throw up thing, thought he was just getting "Edinburgh flu", and kind of ignored it. Then on Friday night he was admitted to hospital because he couldn't stop being sick. He has been in hospital since then, with a huge rash on his hands and feet, some kind of abnormalities on his liver, and continued vomiting. He's a lot better now. The doctors think he has some sort of extreme version of streptococcal bacterial infection and have been treating him with antibiotics and have him on a constant drip. He may be in till the weekend. The Mother of all the Byrnes is with him, as is his friend who is also (handily) a nurse, and OldestB lives not too far away. A bit of a blow for ComedyB Jr, who is supposed to be running at least three shows at the fringe. Wish him well, won't you?
Posted by Trish Byrne at 5:54 pm

Mmmmmm, that must have been the cauliflower cheese, yum yum pig's bum