Shows we saw at Edinburgh 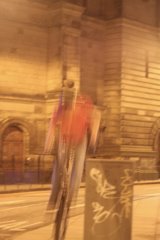 This year, we had possibly the best balance yet between loads of shows and loads of hanging around with people. Aside from the usual desperate Saturday night scramble for something decent to eat, we remembered all our own rules and avoided overcrowded, really cramped, basement pub-style venues. So that cut out The Stand, sorry Eddie Bannon and friends, and also The Tron, sorry Glenn Wool. However, we did see a lot of stuff. Friday night we went to see Matt Kirshen. He's very funny. Clever, pleasant, likeable, witty, personable. A good comedian. But there were fireworks on Friday night. ComedyB was presenting Best of the Fest in the Abbembelly Booms. It was a typical late night audience. One stag party in, many of the more middle-aged patrons were asleep (it starts at midnight), and the comedians were having to work for it. Glenn was reasonably popular, if a little rambling. And then Rhys Darby came out, and he was also very good. He does sound effect stuff. Then Richard Herring. I was quite looking forward to seeing Richard Herring. I was wrong. His material was alright, I guess, but the drunken element of the audience didn't appreciate it and one of the stag party started a slow handclap. Richard Herring did not appreciate that. First, he berated the drunk bloke for not appreciating his very clever style of comedy. Then, he had a go at the other comedians. "Sorry I can't make silly noises", he said "or be casually racist like Glenn". There was an argument, and he eventually left the stage. Luckily the next act on was Phil Nichol, a man who could make people laugh during an air raid, I'm sure. He pulled his pants down, pulled his t-shirt over his head, and sang songs very loudly and with a kind of frightening energy. Relief all round.
Saturday, we saw Hoodwinked, a kids' film, CGI and all that, you know. It's fine, as these things go. Some amusing jokes, some nice songs, some nice homages to computer games, but something lacking to make it really great. However, it does feature very positive potrayals of both young girlhood and old womanhood, and there is no innuendo, and not a lot of violence. So it's a parents' dream of a film. We had great intentions to do other things on Saturday, but we were very tired, having been up drinking the night before till ever so late.
Sunday, we saw the loveliest film. It was called Into Great Silence, a two and a half hour film about a particularly ascetic silent order of monks and their daily lives. Sadly the director didn't have enough money to shoot the whole thing on lovely film, so a lot of it is filmed on digital video, which gives it too much grain, but otherwise it's superb.
Sunday night we saw ComedyB's show, which was up to its usual high standard and has a Special! New! Opening! which is very flash and swish.
On Monday we saw a children's show, as we usually do, called The Onomatopoeia Society 2: The Etymological Conference, which I thought had some serious flaws: largely, it was too difficult to hear some of the dialogue, and the bit where the Kissing Horse would run out and sing a little song to cover up lazy joke writing was an awful admission that there was lazy joke writing. Why not just write better jokes? ComedyB pointed out that he was annoyed about the show's definition of the word "alliteration"; he claims it only applies to consonants. I confessed that I thought alliteration was when two or more words in a sentence started with the same letter. It turns out that Webster's agrees with me, while other dictionaries agree with him. So everyone's right. Or only some are.
Later we saw God's Pottery do their Concert for Lavert, which was a very moving show in which Gideon Lamb and Jeremiah Smallchild sing songs and try to bring us all closer together (even the Jews and Muslamics), and raise money for a young boy called Lavert, who has cancer. They don't know what kind he has, or who he got it from, but they're going to help him beat it. Great show. I felt affirmed by it.
Then we went and did a lot of drinking, because it was the launch of ComedyB's DVD, his first ever, and we had to help swell the crowd at the party.
Then, much later, we saw some boys trying to jump over things in the street on their bikes and everyone stood and applauded, because we were all so used to being an audience by then that we had to react to them in some way.
And today we came home, and the woman in front of me reclined her seat, so I stuck my knee in her back, and when she complained that I was sticking my knee in her back, I said "No, I'm just getting my magazine out of the pocket", and waved my magazine at her, but really I was sticking my knee in her back. Fuck her.
Posted by Trish Byrne at 6:19 pm

The last time we flew, the woman in front reclined her seat practically on take-off, and kept it down all through the flight (it wasn't even night-time, just early evening). And then she had the gall to snap at Alex, for being a toddler basically. I was surprised into apologising.