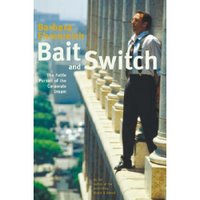 This is really quite a terrifying book, for several reasons. One, it really manages to knock home the idea that America's interior is largely composed of windowless rooms where people are either trying to convert you to religion, or extort money from you in some other way. Two, it reminds you again of just how stupid people can be: people in the job market seem to really believe all that enneagram crap that we used to do in the Theo for a laugh (which seems strangely at odds with their fairly serious Christian beliefs. I thought proper Christians didn't believe in all that stuff?). Three, it offers a view of the kind of dystopian future we could end up in here in Europe if we don't hang on to our employment laws for as long as possible. The next time I hear someone from IBEC moaning about the strict employment laws in Ireland, or the minimum wage, I'm going to send them a copy of this book.
Posted by Trish Byrne at 3:13 pm

I don't fully understand the deal with that Enneagram nonsense, but I gather it is something that people have no problem meshing with Christianity. Maybe this is part of its appeal (to stupid people).