Send in the Idiots 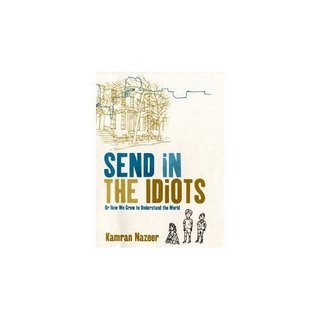 You'd be forgiven for thinking that I haven't read a single thing lately, but you'd be wrong. In fact I read all the time these days, at work. Why, just this week I read about how Benin, Burkina Faso, and Mali banded together with Brazil to use the WTO to force the USA to cut subsidies to its cotton farmers. And about the interesting new situation with regard to intellectual and indigenous property in Africa, where state governments don't play that strong a role, and the possibility that windfalls to certain tribes or ethnic groups from transnational corporations (for a malaria drug, or oil, or ancient treasures) might exacerbate existing tensions between groups and seve to further weaken the state government's position. And about public administration and financial reforms in Uzbekistan. And about acculturative stress in Korean and Indian immigrant adolescents in the US.
And it turns out that I'm not bad at reading lengthy articles and creating 150 word summaries of them. It turns out that I can skim them pretty well and then pass the salient information on to someone else. And it makes me very happy to be in that kind of job.
But I have been reading books. Honest. Why, here's one now.
Send in the Idiots is a book about autism by a man who was diagnosed as autistic when he was a boy and sent to a special school in New York. In this book, he tracks down some of his classmates and spends time with them in order to write about what it is like to be autistic. Now, most of the people he hooks up with are pretty functioning autistic folk. They have jobs, and they live away from their parents, and some of them even have relationships. But the autism is always there and it informs everything about them. And not all of them make it. There's a definite air about them of being aware that they are the lucky ones. There's even a story that proves it. It's an enjoyable book. I don't know if you can really take much away from it except some people's experiences of living with a particular condition; I wouldn't use it as a basis for claiming to know all about autism or anything like that, but it's a good book, well written, with some interesting broader theories about the condition thrown in. The marketing is quite creepy, though. The copy I bought was an advance readers' one, and on the back it says stuff about how the book is guaranteed to be a big seller because interest in autism is huge right now. It seems like such a calculating thing to say.
Posted by Trish Byrne at 9:28 pm

Bizarrely, Steph bought me that for our anniversary. But I haven't read it yet.