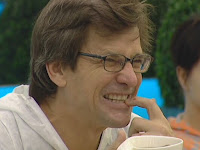 I've had a large measure of sippin' tequila and a couple of beers and I'm pleasantly drunk. What shall we talk about? I've been talking about the horrors of Celebrity Big Brother all day with my internet pals, and I'm bored doing that now. I'm only still watching it because I am fascinated by older Dirk Benedict. I haven't seen him, even a picture of him, since about, what, 1985 or something? It's so strange to look at him now. I feel like I went to school with him or something. He looks so much the same, but older. And more right-wing. It's so strange.

Celebrity Big Brother would be greatly improved by less bullying and racism, and more Dirk Benedict face down in the mud scrambling under a net with Jermaine Jackson and H from Steps singing the music from the A-Team out of the back of a limousine at him. I mean, how could any Sopranos dream sequence compete with something like that?

You know what? I feel down. And why? Because I haven't finished reading a book since the middle of November, and I kind of miss writing my book.

And I miss Jack and Stephen.