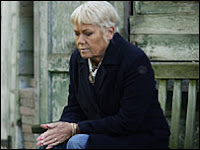 Recently I have fallen out of love with EastEnders, having been an avid viewer for twenty years or so. It just got rubbish. The day I decided to stop watching it for good was the day that Ian was about to set off for a weekend with the Walford Round Table (or some such organization that had just been invented) and was going to pass Dawn off as his wife, because of some hilarious mixup that had happened at another event. Utter rubbish.

But, over Christmas, like everyone else, I got sucked in by the promise of seeing Pauline's sour face get a smacking and then seeing her end up dead. Unlike my mother, who pronounced the whole thing "stupid", I actually loved the couple of weeks leading up to it, in which Pauline pretended to have a brain tumour, then confessed that she didn't have one after all and walled herself up in her smoke-damaged house to live like some demented Dickensian withered widow woman, sniping at anyone who wandered into the frightening shell she called home.

And then today, well. Today was the funeral, filled with such classy moments as the traditional East End horse drawn carriage, the quiet threats from Martin toward poor old Mr. Benn, and Peggy's magnificent line in response to Mo's "what you doing 'ere? You didn't even like 'er." "I just wanted to be sure," said Peggy. "And I 'ad this 'at."

But the final scene, where the police come for Sonya during the funeral, while Dusty Springfield sings "You Don't Have to Say You Love Me" and the curtains close on Pauline's spectral face in a hideous framed photo and the obligatory flower display spelling out "Mum" (presumably from Shell, who didn't bother her arse to come to the funeral, which just proves what a miserable old bitch Pauline really was), was a moment of pure, over the top genius. Happy New Year, the BBC. Perhaps I will have to start watching Stenders again.
Posted by Trish Byrne at 12:14 am