Goodbye to a good dog 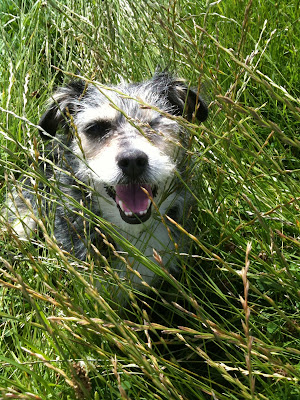 So, while we were away in Berlin and Paris (aka the holiday I now wish I'd never gone on), Trixie got very sick. Her minder, Catherine, a retired nurse, was able to keep her alive till we got home, mainly through round-the-clock injections and some incredibly expensive magic cream. Catherine fully expected that we would arrive home and see how appallingly sick Trixie was, and that we would immediately take her to the vet and decide to let her go. Trixie being Trixie, though, she rallied when we arrived back. She got up out of her bed and came to the door to see us, then she ate some chicken and went back to sleep.
The next morning she seemed better again, managing to give me a little wag when I came downstairs, and eating her breakfast. We were hopeful.
But then we went to the vet and she let us know that this was absolutely as good as it was going to get and she was probably mostly coasting on the excitement of us being home. She was exhausted. Every bit of her was worn out, and the magic cream was, we were assured, only going to keep her alive for another couple of weeks at most, and that was only if we added in steroids and some other medications too. Plus, we would have to keep her separate from the other dogs because if the magic cream touches your skin at all, it drops your blood pressure and gives you a massive headache.
And suddenly I just couldn't do it anymore, either for her or to her. I didn't want her to have to fight to breathe anymore, I didn't want her to pee everywhere, or to absolutely stink because really at this point she was only eating chicken and nothing else, and all her meds were now making her stomach upset.
So I held her and the vet gave her the injection and her heart stopped and it was over.
When I called Catherine and told her, she said, "I'm glad you never had to see her like she was on Saturday."
She is being cremated, and I will be taking her ashes to the firing range to scatter them over the rabbit warrens, which were her favourite places in all the world anyway. And I will take the card out of my car, the one that says, "if you see a small dog beside this car, she is okay," which I used to put in the window when I couldn't get her to come back so that people wouldn't think she'd been abandoned, and I will put it in a box with her collar to keep.
And then I will get another dog. But it won't be as good.
Posted by Trish Byrne at 11:02 pm

I'm sorry that I never met Trixie and that she is gone. Best wishes.

Sorry for your loss. Bastard dogs, dying on us.

I'm sorry I never met Trixie. Hugs to you both.