When I eventually get around to rewriting my zombie apocalypse novel and somebody eventually makes a film or four-part telly series out of it, there's one bit I'm particularly looking forward to. It's the bit where our heroes (that's the people who are still alive, btw, I don't hold with any of this new-fangled pro-zombie nonsense) go out foraging for food, find a store selling these items: 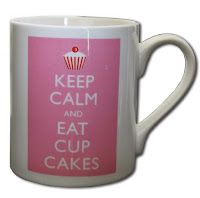 and, just for fun, smash the fucking shit out of them.
I am really hoping I get to be on set that day, and that the crew will let me set up the display of these hideously gendered, winsome, sickly gewgaws. Perhaps I could build a lovely pyramid of them, gingerly placing them one atop the other, wincing occasionally at that little squeak of china on china that sets my teeth on edge, and grinning away at the thought that soon the whole lot is going to come crashing down. Hopefully we will have to do several takes and then, fingers crossed, play the whole thing back in slow motion (even though I normally hate slow motion).
For these mugs to generate the full berzerker rage, it's best to happen on them in a bookshop, where they have no fucking place being, and, even better, to view them alongside their male counterpart: 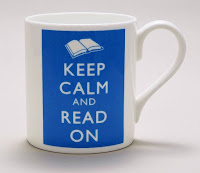 Yes, that's right. Men read books, you see. Women eat cupcakes.
I have to go back to this bookshop during the week to collect a book for mrmonkey (because he's allowed to read). Maybe I will bring my smashing stick.