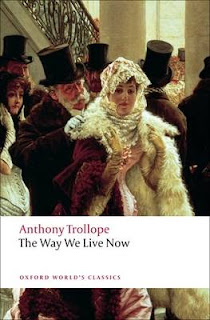 A quick look at the bibliography on Anthony Trollope's Wikipedia page is enough to give anyone an instant case of sympathetic writer's cramp. The man was prolific. And yet I don't know anyone who reads him anymore (although obviously someone does), and his books, when they turned up in the bookshop where I used to work, always went unsold. This made him a perfect choice for me for CBC, because I'm always curious about the writers everyone has heard of but nobody reads (I'm coming for you too, Lawrence Durrell).
Although a lot of people (myself included) think of Trollope as a kind of gentler, more pastoral writer, themes of heartbreak, greed, deception, and avarice were central to a lot of his writing. Even by these standards, The Way We Live Now is apparently one of Trollope's least sentimental and most scabrous works, written on his return to England after a long absence, and in response to what he saw as the country's massive decline.
It is his longest book.
It is too long.
In true triple-decker Victorian-serialized-novel style, The Way We Live Now features a lot of amusingly named characters dicking each other over with protracted legal proceedings, marriage shenanigans, and vague threats about revealing one another's secrets if signatures are not produced or certain favours are not done. Unfortunately, Trollope has a number of limitations as a writer that make the whole enterprise more of a slog than its outline suggests.
I have to agree with Henry James's criticism of his authorly interjections ("what will happen now, readers? Who can tell?" etc.) which are jarring and kind of smug when you just want him to get on with it. In addition, he's so keen to make sure that the reader is never lost and never in any doubt about what is in every single character's mind at every single point in the story that he spends wholly unnecessary pages recapping, clarifying, and explaining and the reader ends up bored instead. It is the literary equivalent of the constant recaps you get on reality television programmes, and it's just as annoying.
Nevertheless, there's a lot of really good material in here and a great many fantastic characters. I particularly enjoyed


It does seem, though, as if Trollope felt that if he just included the main story the novel would be deemed too cruel or too cold, so he dropped in four or five other storylines and associated characters, none of which are particularly interesting and all of which just dilute the main thrust of his point, which is that modern society can be kind of crap if you don't have money and you know that you don't know how to play the system, but even crapper if you are obsessed with getting money and think you know how to play the system.
If he'd kept the story leaner and ditched a lot of the more unnecessary side plots and characters, he probably wouldn't have needed to keep reminding people of what was happening, and could have kept up the forward momentum a bit better. Then you'd be looking at an absolute satirical classic rather than a bit of a niche interest. I'm sure of it.

Re Durrell - the Alexandria Quartet is very good for the first three books, but you have to be willing to tolerate some prodigious overwriting. Reading Tropic of Cancer is probably a fair test. If you can cope with Miller, you can probably put up with Durrell.