Bastard dog (it's all about quality of life)

When Trixie was diagnosed with her heart condition two years ago, it was suggested to us that she might not have very long left. She now takes ten tablets a day and has to be minded by a special minder or she'll have another heart attack the next time I go on holidays (she's had two heart attacks now). She's also kind of incontinent and if you don't get her outside to pee within twenty minutes of her taking a diuretic, she will pee on the sofa or the carpet or the car seat, or you, even if she's wide awake.
When I say these things to people, they expect to meet a tiny dog who can only barely drag herself from place to place and is constantly at death's door. Just the other day I met one of my dog-walking pals out and about and was telling him about her, and he said, "I don't think I could keep a dog alive once it got to that stage. They have no quality of life."
While we were having this conversation, Trixie was arse up in a rabbit hole on the other side of the football pitch having escaped out of the car before I could get the lead onto her to hold her back. Much of the time, when we go walking up by the firing range, I have to trudge back to the car without her and sit, listening to whatever book I've brought with me, for up to an hour with the other dogs, waiting for Trixie to come back so we can go home and have our lunch.
No rabbit left behind, that is Trixie's motto. 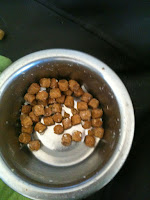 For a while she was off her food (her expensive, vet-approved, low-salt, fat-free, single-protein-source food) and she lost over a kilo in weight, so I started boiling chicken and rice in great vats and mixing this with her food to get her to eat. This worked fine for about a month, and the other dogs are delighted with the new arrangement (because obviously they have to get some of the chicken and rice as well, because otherwise there would be resentment).
But now Trixie has started methodically, spitefully, sucking all the chicken and rice off the nuggets of expensive, vet-approved, low-salt, fat-free, single-protein-source food and spitting said food back into the dish, where it sits until one of the other dogs hoovers it up. What's the way round this? Microwaving the chicken and rice before I add it to the her expensive, vet-approved, low-salt, fat-free, single-protein-source food.
Because she prefers it when it's warm.
Because she is a bastard dog.
Posted by Trish Byrne at 9:23 am

When Dylan was on a similar regimen for Crohns he also got to a sneaky fussy stage. Eventually we just had to do a battle of wills. No new food in the bowl if the old bowl hadn't been cleaned. Trickier with other dogs around.

Yeah, Trixie hasn't quite abandoned her food yet, but her appetite certainly comes and goes.