Boats, trains, and riding horses in the living room. Or, books I read recently 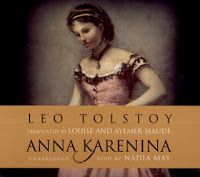 Classic Book Club continues apace. Recently we read weighty Russian funfest Anna Karenina, by Leo Tolstoy, about which enough has probably already been said in the world. All I'll add is that it had the feel of a biography rather than a novel, in that Tolstoy played everything out to its inevitable, unromantic, and bitter conclusion as if he had no means of stopping it (as if it was some kind of oncoming train, do you see?); also, modern life is killing Russia, peasants are good, trains are bad.

When you write it down like that, it does make it seem a lot more forbidding than it really is, so if you're thinking of embarking on Anna Karenina and the size and reputation of the book are putting you off, don't let them. I let them for years, but when I finally read it I found it warm, easy to read (I read the Maude translation, which has a reputation for quality (although as Eoghan pointed out, this could just be because Tolstoy was friends with them)), romantic, and very funny.
The more modest 20th Century Book Club recently read The Siege of Krishnapur, by JG Farrell, winner of the 1973 Booker Prize. The story concerns the British residents of the fictional Indian town of Krishnapur and their experiences under siege during the Indian Mutiny of 1857. It's told in a perfectly-pitched tone of more-tea-vicar jollity which serves to highlight the eccentricities of the British colonial machine, and to gloss over and magnify the horror of the actual siege. It reminded me of this Monty Python sketch from The Meaning of Life.
Although obviously there's more to it than that. Recommended. I may also give the other books in Farrell's Empire Trilogy a go at some stage.
In more British Empire fun, I finally got around to reading Kydd, the first of Julian Stockwin's series of seafaring adventures about a young wig-maker from Guildford who is pressed into the navy in 1793, a time of war with France (in the books I read, it's always a time of war with France, or at the very least, in France).
This is a real page-turner/button-pusher/screen-tapper of a story that moves as briskly as chain through canvas and features lots of clear and exciting descriptions of life at sea for pressed men. Okay, there's a lot of jargon here, plenty of clewgarnets and boatswains and taffrails and any amount of belaying, but it's all pretty clear from the context and sure, you can always look it up in one of your many reference books about the age of sail, which of course you all have.

What stops Kydd making the ascent from the gundeck of decent adventure yarn onto the quarterdeck of great nautical fiction is its lack of characterisation. Kydd himself is difficult to read and hardly speaks, and his new best friend Renzi is slightly unbelievable so far, but maybe he gets better in the later books. There were also a few jarring details that lifted me out of the story on occasion (I don't care if "lanthorn" is the word they used at the time, every time I read it I think "lanthorn, oh, you mean lantern" and it snags on my brain, and when Kydd looks down on his shipmates on his first trip aloft and describes them as looking like penguins, I wondered how he would know what penguins looked like when they moved? Especially from above?) but these were, I assure you, minor considerations. In fact I've already bought the second one of these and will get to it as soon as I've finished the next Classic Book Club tome, The Way We Live Now, by Anthony Trollope (May 20th, Trollope fans).
Posted by Trish Byrne at 11:24 am

I love the British officers in La Grande Illusion, dressing up as ladies and singing It's a Long Way to Tipperary while in France at a time of war. That film has everything.

Does the Siege of Krishnapur bring to mind the luncheon sequence in Carry On Up The Khyber?