Valentine's Day is over 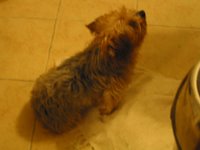 This is Valentine. He's very *shy* and doesn't like having his photo taken, so we weren't able to get any good photos of him. He's a Yorkie who has some trouble with his back legs, but he's a little sweetheart of a dog really.

Poor Valentine was the most scared of all our fosters so far when he came to our house. I think it's because he was with another foster family and not being rescued by us from scary kennels. It took him hours to peel himself away from the front door, and days before he would actually be pleased to see me or Keith when we came into the room. But now he's going back to his other foster home where he can continue the physio on his back leg, and we can continue our search for Milo's best friend ever.

What we have learned from Valentine: Yorkies aren't just little balls of yap. They can be cuddly and they like to run on the beach too.

Well now, ##NAME##, I'm holding you personally responsible for making me think today. I really wasn't planning on it! I was lurking around Blogspot for stuff on Yorkshire Terrier Breeders and I ended up on your blog. More specifically, on your post ##TITLE##. I figured I could get away with out thinking at all today, but along comes your post! Can't say I agree wholeheartedly, but against all odds you got me thinking! Thanks for the wake-up call ;o) .