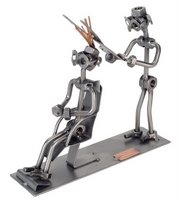 Until yesterday, I never really understood my relationship with my hairdresser. I knocked off work early to go and do some shopping, and arrived into Brown Thomas (a shop I hate) to buy some Aveda stuff (a manufacturer I love). They were having some kind of hair advice promotion, which I ignored, partly because I don't need hair advice ("what lovely hair!" is usually the advice I get), and partly because it was Friday evening, my layer of protection from the outside elements was proving to be an indoor liability of almost menopausal proportions, and my hair had not been washed in five days, not cut in almost six months, and was tied back with a 15 cent hair elastic which could snap at any moment if touched.

It was only natural, therefore, when I should be looking my very best, that the immaculately cool, well-dressed, fragrant, and very sweet man doing the hair advice promotion should turn out to be my old hairdresser from Whetstone, the lovely Paul. I haven't seen Paul in about two years, and when I saw him, I fell that tiny bit in love with him all over again.

We chatted for a bit, Paul and I and the women who work in the Aveda section in BTs (who are very nice ladies, by the way), one of whom used to also be a customer of Paul's.

"Who does your hair now?" he asked me.
"No-one", I said, miserably and truthfully. "I haven't had a decent haircut in Dublin since you left."
The other girl said the same thing.
"You should go back to Joy, you know," Paul said. "She's really excellent."
"Suppose so."

What could I say? I did go to Joy, once, after Paul was gone. And I'm sure she's lovely. But the fact is, and I don't know why I didn't say this to him, that I just like having a gay man cut my hair. Because for an hour every three months or so, I can feel fabulous. Like a film star. Like how a man would feel if you gave him a good suit and sent him to a casino and told him he was James Bond for an hour. and when you're me, and the only magazine cover you're likely to ever grace is Blimey, She's Let Herself Go A Bit monthly, or You Don't Think You're Embracing This Country Living and Telecommuting A Bit Too Enthusiastically quarterly, then you like to have someone fuss over you and make you just feel amazing and glamorous just every now and then. And, you know, a gay male hairdresser is just better at that than a heterosexual female hairdresser.

Don't get me wrong, apart from the, you know, *blows out cheeks to indicate largeness*, I'm perfectly happy with the way I look. But just, you know, sometimes, a little bit, well, you know.

Anyway, Paul is apparently planning to leave hairdressing behind him for ever. Which I think is the most appalling loss to hairdressing. If I had loads of money, I would hire him to fly to Dublin to cut my hair three times a year. I didn't realise how much I missed him until I saw him.

Ooh, or maybe I would fly Gabriel over.

I hate getting my hair cut. Ridiculous, I know.But I just always feel so judged. Yes, I have split ends, I know. But my hair is down to my waist, it's a decent shade and everyone seems to like it. Except the mean hair dressers who yell at me for the split ends and then try to sell me horribly expensive shampoos and conditioners. No thanks.

Surely there is another gay hairdresser somewhere in Dublin?