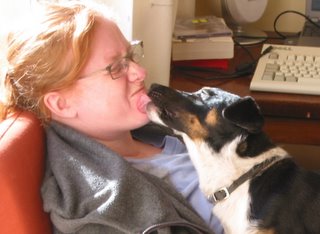 You see, Milo agrees with Iain Banks that this is one of the most important works of Scottish fiction ever. He points out to me that it contains elements of allegory, science fiction, kitchen sink drama, poetry, and post-modernism.

He also explains that it might be time for some chicken now.

I retort that I am less than fond of books that feature the authorial voice as a character, that the ending of the book drags, which is annoying in such a long book that you've invested so much energy in. But I agree with him that the book is funny, the character of Lanark is wonderfully painted, and that the depiction of Glasgow both in the real post-war world and the peculiar through-the-looking-glass world is breathtaking.

This is a book well worth reading. I'm also impressed that, while published in 1981, the book was germinating since at least 1958, when one of the earlier chapters was a runner-up in the Observer short story competition. Hope for us all.
Posted by Trish Byrne at 8:48 pm