While Mrmonkey continues to devour every available instance of the written word as if he was going to be examined on it the next day, I haven't managed to get my reading legs under me at all this year. In fact, it turns out I only read five books that weren't selections for either Classic Book Club or Modern Book Club, most of which I heard about on Twitter.

The only fiction book I heard about through word of mouth was One Day by David Nicholls, who is not on Twitter but is contactable by email through his blog. Halfway through this book (which I really don't need to tell you about, because this is one of those books everyone has heard of and formed an opinion of whether they've read it or not) I emailed him to tell him that I was really enjoying his book but was concerned that he was going to burn me the same way Peter Carey did with Oscar and Lucinda. He emailed me back about two weeks later to say that I'd probably discovered by now that he had done exactly that and he was very sorry. Well, David Nicholls, I don't believe you were sorry at all.

For those interested, the other non-book club books I read this year were: 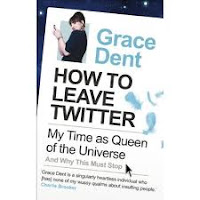 How to Leave Twitter (My Time as Queen of the Universe (And Why This Must Stop) - Grace Dent
This book is going to look so weird in five years time, but right now it's like a club manual for people who understand the point of Twitter. Everyone doesn't have to use it in the same way, but there are certainly ways not to use it. As a marketing tool, for instance. I've been through this myself: "everyone's on Twitter, we should be on it too", except that nobody in the company appears to be on it in a personal capacity, nobody understands how it works, and nobody believes you when you say you can't just tweet about new stuff the company has, you have to have interesting links to content people will actually want to read in their downtime. Urgh.
Sometimes you just want to sit in your pyjamas wearing your old, comfortable glasses that don't pinch your head but are a bit chewed around the ends, and get all covered in cats and drink a beer and bitch about Downton Abbey with people who can't see you. Other times, you might be stuck on a long train ride and the people in front of you have a Siamese cat on their lap, and you have to tell someone.  Other other times, you might want to know that Tom Hardy's on a satellite channel somewhere with his shirt off. Twitter is there for you during those times, and Grace Dent understands that (and is there for you during those times too, although she also understand the importance of going out and doing things that are not connected to the Internet in any way).
It's always a relief to me when I find someone whose sense of humour matches my own, even if I don't always agree with everything they say. Grace Dent is one of those people.
I'm also going to mention her in the same breath as Tina Fey, even though she doesn't make me absolutely sick with laughter in quite the same way, but because I just love reading humour books, especially by women.

Bossypants - Tina Fey
From the time our Edward got his first Erma Bombeck book (The Grass is Always Greener over the Septic Tank, I don't even remember where he got it from), humour books have always been a big deal in our family. People always think standup comedians can produce humour books really well, but I'm not sure that's the case. I think you need a different skill set, one that Grace Dent has, and one that Tina Fey also has.
So a huge thank you to Queenie, who sent me this in the post for my birthday in March and is therefore partly responsible for the tea that came out of my nose on at least one occasion while reading it. Again, this is one of those books that everyone's heard heaps about and you don't need me to go over it all again, so I won't.

The Butchered Man - Harriet Smart
I like crime novels that are about the milieu rather than the crime. I don't really care whodunnit, I care what kind of coffee everyone was drinking while it got dun. This is one of those novels, but instead of being set in some bleak Scandinavian city where society is falling apart because outside values are encroaching on it (like all those books you like), this one is set in a cathedral town in Scotland in 1840 and one of the protagonists is a young doctor (like all those books I like). A clergyman has been murdered and butchered, maybe over a will, maybe over love, maybe over professional rivalry. Yes, we'll find that out, but we'll also get to see some flawed-but-extremely-likeable heroes play to their strengths and some social commentary on the coming of the railways, the changes wrought by industrialization, and the restricted lives of women of all classes. Like all good crime novels, this is a quick read that hits the beats it's supposed to hit and contains the tropes it's supposed to contain, so everyone leaves a winner (except, obviously, the bloke who got butchered).
The Butchered Man was available formerly only as an ephemeral read, but this year Harriet released a paperback of it, so those of you who aren't into the whole christ-what's-this-how-do-I-make-it-turn-the-page thing and would prefer something more corporeal can now get stuck in.
(Also, if you like the kind of thing I like, you might also want to look at Harriet's blog, which is simply teeming with that kind of thing (although it's a bit short on ships and naturalists for my taste, but you can't have everything).

The other book I read this year was about dogs, but, frankly, nobody wants to hear me talk about dogs any more, so I won't bother to say much about it. I'll just say this. Dogs really are special. Science proves it. And John Bradshaw's book Dog Sense (or In Defence of Dogs if you're in the UK) tells you how science proves it. And that's it.
This review from the Independent says it very well, actually, if you do care.

I haven't read "In Defence of Dogs" but I'd recommend "If Dogs Could Talk: Exploring the Canine Mind" by Vilmos Csanyi. He's a scientist and a dog lover and he combines both in his observation of pet dogs and how they interact with families.