At the very beginning of the year, some people in England who know ComedyB because they have a comedy family member of their own contacted me because they'd seen Ozzie's windy day picture online. They wanted to give her a home. 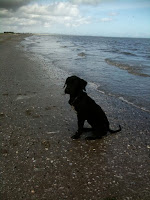 They filled out the adoption form for our rescue and everyone agreed they seemed like a great home. If only they weren't in England, said everyone. We don't rehome directly to homes in England, said the rescue committee. If it doesn't work out, we have no way of getting the dog back. The people were very disappointed. I was very disappointed. Ozzie continued about her life, totally unaffected by all the fuss.

When she came to us in August last year, Ozzie was very ill, you see. Her condition turned out to be pancreatic insufficiency, not uncommon in dogs at all. It means her pancreas doesn't make the enzymes she needs to digest her food, so her food just passes through her, irritating her insides as it goes. Untreated, the condition eventually leads animals to starve to death. Luckily, it's very easy to treat. You just sprinkle enzyme powder on her food at mealtimes, feed her a high quality food, and leave it at that. In the months that we had her, she went from being 17kg down to 14.5kg at her lightest, and back up to 18.65kg again. She went from being a bag of bones who only just trundled along behind you when you walked to being a sleek, black powerhouse of energy with a high-gloss coat who never left a bird unchased, a dog ungreeted, a thing on the floor unchewed, or a lap empty.

Despite the fact that her condition is easy to treat, though, nobody wanted her. A few forms came in asking about her, because she was said to be good with both kids and cats, as well as other dogs. But every time we mentioned her condition, the enquiries stopped.

Still the family in England asked about her, admired her photos, and chatted back and forth with us about her. They didn't care that she had a condition, or that she would be expensive to feed, or that it would be expensive to get her to them. They just wanted her. We sent emails back and forth. They promised they would send her back if it didn't work out. They swore they would take care of her.

So last weekend, we brought her. Mrmonkey and I took her on the ferry to Holyhead and drove her down to where the family lives. We were prepared for the people to really take to her immediately, because she's that kind of dog. But even their number one dog, a three-year-old labrador called Maddy, wanted to be her pal instantly. She ran all around the house with her, licking her face jumping on her, and bringing her toys for Ozzie to play with.

Ozzie knew something was going on. She had been separated from our other dogs, shut into the car inside a scary loud box for some hours, driven for ages on a very long road by two very, very tired people, and finally had her bed and blankets left in someone else's kitchen for her. She was a bit clingy and she wasn't sure about this new dog. 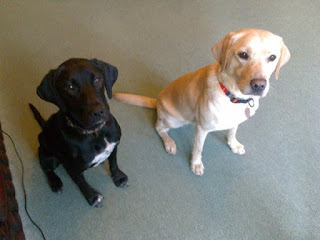 Even still, despite some tears from me on parting from her, she only sat by the front foor for a short while after we left her behind with her new family. She then did the classic first-day-of-school maneuver and just bloody got on with it. Sat on laps, played with Maddy, ate the cheese she was offered, went for walks, and settled down to sleep.

So she will be very happy. A wee dog who was dumped in a box a year ago, and now she's in a perfect home with people who just love her.

I don't know how you do it, girl. You're amazing.