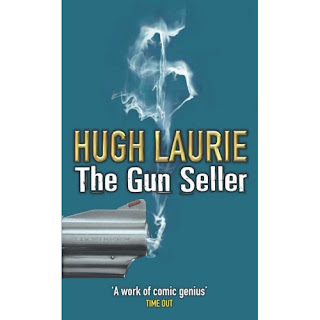 This is a highly entertaining book by that nice man Hugh Laurie. In a little interview at the back of my U.S. copy (because you can't just sell people a book any more. You have to sell them ancillary bits, as if it was a DVD) nice Mr. Laurie explains that he wrote the book because a quick review of his diary one day revealed that he had done exactly nothing interesting for six months. So he decided he would write himself a more glamorous and exciting life. It's a simple reason to write a book, and it's a simple book.
Imagine if P.G. Wodehouse had written a thriller.
There you are.

Of course, the fact that it was written ten years ago, or thereabouts, means that it has aged hugely. There's all kinds of things in it that just wouldn't happen now. Everything about international terrorism has changed since then, so it all looks very innocent now. But it's still fun.
Posted by Trish Byrne at 8:47 pm

Is there any connection between the book's title and this anecdote?

Hey, I never knew that.

Manuel to the rescue.