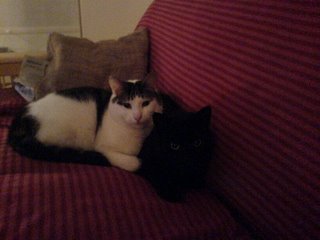 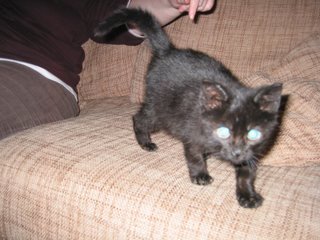 Our cat, Killick, died last night at the vet's. He was a little under the weather on Tuesday night, and was very sick all day Wednesday. I took him to the vet yesterday morning and they kept him in and gave him antibiotics and fluids, but he didn't bounce back.

Poor guy was only a year and a half old. He never got the hang of retracting his claws and so you would often come upon him in a room, patiently waiting with one paw above his head for you to free him. He would chase after hair elastics and bring them back for you to throw again. He would crouch at the top of the stairs when you threw his ball up there, his ears flattened against his skull and his eyes crazy wide as if he was going to spring into action any second. Then he would just watch the ball go right over his head and go back to looking at you again.
Posted by Trish Byrne at 4:27 pm

I'm sorry to hear that. Sounds like you loved him and he loved you (as a cat can) while you had him.