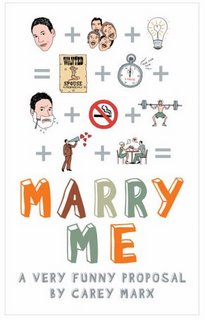 An appropriate choice for the fortnight gone by. Carey Marx is a friend of Elvis P, and Elvis recommended I buy this book. Of course he recommended I buy it new, but I did not. I found it in the Oxfam Bookshop on Byers Road in Glasgow. An excellent Oxfam shop, I urge everyone to patronise it. Carey didn't mind though, he said that he would not be happy until someone told him they'd read a half-burnt copy they found in a skip.

Anyway, the book is good, which is a relief, because there's always that trepidation when you approach a book by someone you know, or someone who knows someone you know. Basically Carey decided that 2005 was going to be his year of adventure, and one of those adventures was going to be that he would find his perfect woman and marry her. Conveniently, this turned out to be an easy pitch for an Edinburgh show and a book. It caught people's imaginations. And, bless him, he worked really really hard at it.

I won't tell you what happens in the end, because that wouldn't be fair. I will tell you that I liked his choice to stick to the storytelling aspect of it at the expense of jokes (unless I've just really insulted him, and actually it was supposed to have jokes galore on every page and I've missed them), and that he does a lot to banish the stigma that attaches to dating in the UK. Yes, I would read another book by him. I would also go and see his standup.

So there you are. Oh! And the book has Elvis P in a cameo appearance. So it was definitely worth it.
Posted by Trish Byrne at 8:45 pm