Fat comic and the forces of sodomy 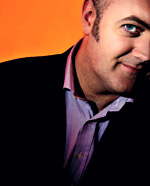 We went to see Dara O'Briain in Vicar St. last night. Whatever its limitations when seeing bands, Vicar St is a great place to see comedy, especially if you've got front row centre seats on the balcony, where you get to look down at the full house below you. Dara really is just a quality performer. Two hours of varied, hilarious, well-observed, clever comedy that never understimates the intelligence of the audience is hard to come by, but he delivers it.
My particular favourites are the image of some young person jogging along beside technology asking "what have you got for me today, technology?"
"Well, I've got a phone that you can carry around and call people from anywhere in the world!"
"That's brilliant! What have you got now?"
"I've got a phone with a camera attached, so you can take pictures of all your friends!"
"That's brilliant! What have you got now?"
"I've got an iPod that plays your music and stores your photos!"
"Oh shit, I've got a stitch. You carry on without me, I think I've gone far enough."
He breaks up the second half of the show very cleverly too. Having been invited on to the BBC's Room 101, he spends some time thinking about all the things he hates (opining that comedy is the ideal art form for petty things you hate. Broad strokes of emotion? Leave that to music. Irritating people you met on the train? Comedy!) but of cours they only used a few. So he has made a list of other ones, which he gets someone in the audience to read out. It's a good plan, because as soon as the interest in one topic starts to flag (assuming it does), he can just switch to the next thing. Smart.
He is just class, bless him.
Posted by Trish Byrne at 5:30 pm

I loved his crack about the fecally-obsessed Gillian McKeith:

"In Ireland this is what we thought Protestants looked like when we were growing up."