So, the whales of West Cork are putting on a remarkable show this year. This is fantastic for Irish whale-watching enthusiasts. Traditionally, we would either have to hitch a ride with a scientific or fishing vessel travelling out into the middle of the Atlantic (still technically within Irish waters, but too far out to be any use to day trippers) or take off for one of the more reliable whale-watching sites around the world. 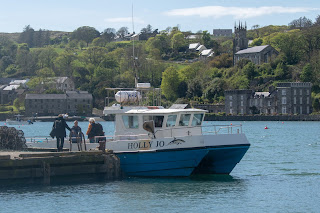 This year, though, you can book yourself on a boat with Cork Whale Watch out of Union Hall, sail past seals, shags, and gannets, and, just a couple of hours later, you can have a close and relatively undisturbed encounter with minke whales, humpback whales, fin whales, gannets, and hundreds upon hundreds of dolphins.
You should definitely go. You would love it.
As a veteran of many whale-watching adventures from New Zealand to the Azores, though, let me warn you about one other piece of fauna you'll probably encounter on your whale-watching trip: the Big-Lensed Camera Wielder. (Okay, they're really a person. You knew that.) This person definitely thinks that their bigger camera gives them a right to a better position on the boat than yours, even though they have paid exactly the same amount for their ticket as you paid.
Two things particularly annoy me about this person. The first one is that they always, always want to be right at the bow, pressed against the rail, as close to the pointy bits of the boat as possible (I know heaps about boat terminology). And this is annoying because that's where the dolphins will show up to bow ride, and guess what the BL CW does not care about one bit? Dolphins. They are so over dolphins, they don't even ooh or aah when the dolphins jump out of the water in perfect synch, right beside their heads. Which is a pain for you, because obviously, like all right-thinking people, you love dolphins, and you want to watch them bow ride, because it is one of the greatest joys in all of life.

The second, and most annoying, thing about the BL CW is that despite forcing you into what they consider an inferior spot on the boat, and making it clear throughout the outward journey that they have no intention of relinquishing their spot, they will absolutely expect you to move whenever necessary when the whales show up. Because, of course, the whales don't stay at the front of the boat, and the front of the boat doesn't stay still. And a good captain knows how to get everyone the best view possible. So the BL CW often discovers that when the action starts, what was a great position is no longer a great position, and suddenly there's a humpback breaching off the stern where everyone happens to be throwing up. And they will one hundred percent try to get past your face and your phone camera with their huge lens, and they will expect you to be fine with that, because do you not see how expensive their equipment is?
You can let them or not. But don't be intimidated by them. Once again, you paid just as much for your ticket as they did.
Also remember to wear warm clothes, a hat, and plenty of sunblock.
Enjoy the whales. Don't be put off by the fact that their abundance is almost certainly a sign of some terrible impending disaster.
Posted by Trish Byrne at 2:09 pm