In the last week I finished reading not one, but two history books. One of these was a long, broad book taking in the whole sweep of 14th-century Europe and concentrating quite hard on the Hundred Years War, the Avignon papacy, and a lot of minor French nobles. The other was a short book about the first group of female convicts to be sent to Australia, which featured the sea, transportation, ships, and world travel.

One of these books had such a boring first thirty pages that I struggled to get through them and ended up taking weeks and weeks to finish the book. Can you guess which one?
Yes, it was The Floating Brothel, by Sian Rees. I spent weeks trying to get through the painfully dull descriptions of court proceedings and petty crimes, only to find that many of the women mentioned in these early pages don't even end up on the transportation ship the Lady Julian, leaving me wondering quite what the point of it all was. (I suppose the point of it was to explain something of how the justice system worked, but god, couldn't someone have told her?)
Once the Lady Julian leaves London, the story gets more interesting and you learn all sorts of things about 18th century sanitary arrangements (not good), attitudes towards women's sexuality (not good), the state of the early colonists in Sydney Cove (not good), and the sanctity of shipboard marriages (not good). Despite the surprisingly affecting narrative of ship's cooper Jon Nicol to help her, though, Rees never really manages to maintain a good balance between the context and the detail, the backdrop and the specific story. Disappointing. 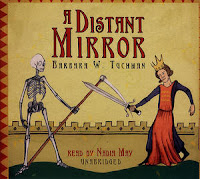 The same could certainly not be said about A Distant Mirror, by Barbara W. Tuchman. After reading this book I felt a little dizzy from the sheer amount of information in it, but also genuinely educated, as though I understood something fundamental about the way the world (or, at least, western Europe) is organised that I had hadn't understood before. I normally have tremendous difficulty with broad-stroke histories, especially ones that feature a lot of campaigning and land battles (I mean, really, land battles? How tedious!) and similarly-named kings and popes following on from one another and more or less doing the same thing over and over again, but Tuchman's ability to leaven this relentless march of the gowned and bearded with exciting incidental stories about bizarre religious sects, people being set on fire, the horrors of the Black Death, and knights, knights, and more knights gave my brain a break whenever I needed it.
Unlike Rees, Tuchman makes her focus clear from the very start: she uses the noble French noble de Coucy family as the backbone of her narrative, and her choice is a wise one. Enguerrand de Coucy was a prominent landowner in both France and England, was an important military leader who was centre-stage for key military and political developments, and was married to Edward III's daughter Isabella (a woman who, let's say, knew her own mind). He might not seem a particularly heroic figure by today's standards, Tuchman admits, but he exhibited genuinely noble attributes and did his duty as best he could despite his divided allegiance. He also stayed alive for quite a long time, which important for the central figure of a book about a whole century, and more than many of his contemporaries managed.
Everything from clothes to tax systems to religious observances is covered here. The Peasants' Revolt, flagellantism, the oppression of the Jews, art, literature, the beginnings of the age of exploration, the end of the Crusading spirit, the hypocrisy of the chivalric ideal, and proof that just about everything that happens in A Knight's Tale is historically accurate, yes, even the Queen songs. What more do you want?
Alright, maybe not the Queen songs.

"A Distant Mirror" is one of my favourite history books. When I read news stories about modern Afghanistan I think of the society in Tuchman's book. I don't mean that the two are the same but I find the comparison helps me, as an analogy of how different their society is from our own.

Tuchman's "The Proud Tower" (about the World pre-first world war) is also good. Her book about the start of the first world war has a good reputation, I think.