1: Patrick O'Brian - Treason's Harbour (or, the one with the diving bell) 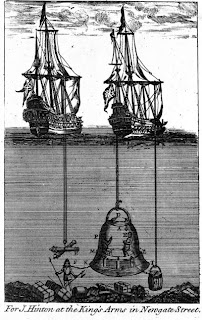 Sometimes people ask me what would be a good starter Aubrey/Maturin novel, so that a person could just see if they liked them without having to commit to anything very serious. (I think people really only do this to shut me up, to be honest, but sometimes it's just nice to chat.)
If you don't mind jumping in almost exactly at the middle of a series, thereby spoiling some earlier storylines for yourself, you could do worse than starting with Treason's Harbour, I think. It's got a lot of the elements that make the series great, it's pretty easy to follow the action without a lot of prior knowledge, and it's not overburdened with nautical talk.
Just for the record, some of the elements that make the series great are: