Oh little blog, how I have neglected you

There's really no excuse for it.

Did I mention we had another dog here for a couple of days? He followed me on the beach last Monday. It was a beautiful day and we were having a particularly thirsty walk, so I decided to walk my guys down to the Boyne for a drink and a splash about. I figured there would be people around, but I figured if I kept them on the lead till the last minute, all would be well. Just as we reached the river bank, though, along comes this very bouncy collie cross who decided he wanted to hang out and play with us. After a couple of minutes of hanging around with him I realised that nobody seemed to be looking for him. Nobody was calling him or walking towards us with a lead in their hand. He wasn't wearing a tag. He didn't leave us and go running off. I started to ask people if anyone knew him. Nobody did. I walked all up and down the bank, nobody had ever seen him before. I got all the way back to the car. Still had an extra dog, who was very excited by all the other dogs I had in my care.
I couldn't leave him (this is what it will say on my tombstone, by the way). I was worried he'd be hit by a car or taken away by someone less reputable than me if I just let him loose. Actually, that's not even true. I couldn't leave him because at this stage I know the difference between a dog who's just having a run around and a dog who is lost, and this guy was lost. I'd already spent over an hour looking for his people, so obviously nobody in the immediate vicinity had lost him. Therefore, he had to come home with me. 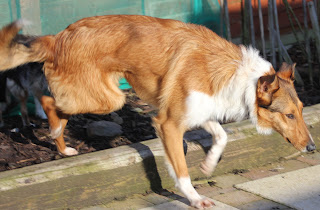 So he did. He was so well behaved, I loved him immediately. You always think you're going to love the difficult ones more, but honestly, sometimes the handsome ones who don't pee in the house, don't start fights, don't chase the cats, don't need a lead when they're walking because they just stay beside you, don't cry at night, and don't do damage do make you fall in love with them straight away.
The next day I drove him back up to the same spot and walked him around again. A woman approached me, delighted to see us both. I hoped she was his owner, but no, it turned out he had followed her home the previous day as well, and she couldn't take him in because she was leaving the house to go to work. She had called both the warden and the rescue about him, but had to leave him there. She left out a bowl of food and water for him. She said he was shaking when she tried to pet him. I said I didn't have that problem with him, and we figured it might be because I had dogs with me so he knew I was alright.

I had a little cry when Liz came to take him away to his proper foster home. He just looked so scared in the back of her car. He'd only just got settled in our house and stopped pacing up and down in confusion, and now here he was being shunted off again.
He'll get a lovely home, but I do still worry that he was stolen from someone and dumped up by us. I just can't believe anyone would get rid of such a beautiful, friendly, well-behaved dog on purpose.

I beg you, if you have a dog or you know someone who has a dog, please, please, please make sure the dog has a name tag including a phone number. Have a couple of spare tags knocking around in case you lose one. Please, if the dog came from a breeder and it has a microchip, make sure the microchip is registered to the owner, not the breeder.

This fine fellow is microchipped. Hey, he's IKC registered as a pure-bred rough collie (I know)! He's got a kennel name and everything!
But none of this is any bloody good to the dog because the chip is registered to a breeder who doesn't want to know, didn't keep any records of who he sold the dog to (of course) and couldn't be of any further help (of course).

Anyway, if you know this dog, please let Drogheda Animal Rescue know. If he's not reunited with his owners in a few weeks, he'll be neutered and rehomed. If you've ever wanted a first-time family dog, this is the one for you. But you must be LOVELY. I will accept nothing but the best for this gentleman.
Posted by Trish Byrne at 7:50 pm