Off on the wrong trotter 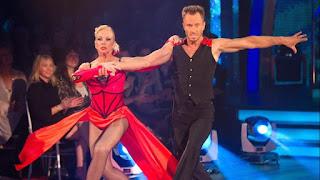 Strictly Come Dancing is over for another year, and not before time too. I have loved this show since halfway through the first season when I discovered that, far from being yet another reality show in which "celebrities" bicker with one another over stupid tasks, it was actually a show that celebrated improvement, cooperation, and partnerships. It has always had lovely little character arcs, individual "journeys", and fantastic interplay between the pro dancers and the celebrities they look after.
Oh, but the recession has hit Strictly hard. I'm guessing that part of the decision to jettison a bunch of my very favourite dancers this year in favour of some unknowns (Matt, Ian, Darren, Lilya, and Brian were all out and Robin, Artem, and some others I still don't know the names of were in) had to do with being able to pay the newer, younger dancers less money. In fact, the amount of dancing on the show was drastically cut. Contestants didn't do as many numbers, there were fewer pro numbers in each show (sometimes none at all), and a lot of the little bits of VT they used to do to make up the running time of the show were also removed. In an effort to draw attention away from these changes, they brought in props and non-traditional costumes, like they have on (whisper it) the American show. To my mind, and I realise I have come over all Federation President Barry Fife here, these are changes for the worse. They also introduced the Argentine Tango at a much earlier stage of the competition (I wonder if that was in order to get celebrities to agree to appear on the show? Everyone seems to want to dance the Argentine Tango), which was definitely a mistake because you just need a certain level of skill to be able to dance it even vaguely well.
It was a real shame as well, because apart from the inexplicable popularity of homophobic, reactionary, conservative old crone Ann Widdecombe, the core of the show was strong. The dancing was great, there was a little romance, and yes, I even warmed to the new dancers. Well, to Robin and Artem anyway. I still couldn't tell you what the other ones are called.
Even Claude's show was compromised. She had the same people on over and over again, no celebrity guests, and no budget for VT bits. Much discussion of pictures of dresses, which was most dull. Even Claude couldn't hide how bored she was with business like the Strictly A-Z.
Of course, it's possible that none of these changes had anything to do with cutbacks and everything to do with trying to shake the show up in order to make it more competitive. If that's the case, that's even worse. If the BBC are just trying to ride out the lean times by putting on a stripped down show for a few years, that's fine, but if they really are messing about with it to try to attract viewers, then the tinkering won't stop until they've wrecked it, because that's what happens.
Still, there's always Pointless.
Posted by Trish Byrne at 10:47 am