We went on holidays 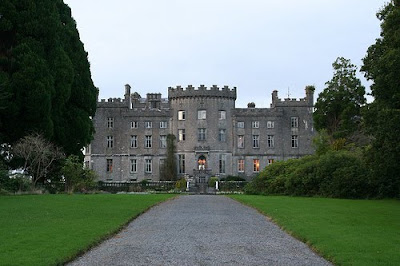 To Markree Castle in Sligo.

The plan was originally to go to Cuba, but that turned out to be very expensive and a massive hassle, so we decided to have a cheapish reading week in Ireland, which wouldn't involve flights or luggage allowance or any of that crap. Markree, as a bonus, let us bring the dogs, so we didn't even need to worry about that. Just chuck everyone in the car and off we go.

From that point of view, the place was a dream. The dogs were very welcome, and the room was big enough for all six of us to bunk up together, spread over two beds. There was plenty of space to run them across the (as advertised) rolling parklands and formal gardens. Nobody disturbed us, and we didn't disturb anyone else. We took them out for a long run in the mornings, then spent the afternoons sitting around reading while the dogs slept. Then another run in the evening before dinner, and another short walk in the moonlight before bedtime. Top notch. And we saw a stag one of the days. It was all very Regency.

There were a couple of problems with the room. The shower was awful. Truly awful. With the shower head on, you were standing under a dribble of hot water. Taking it off produced a slightly more satisfying trickle, so we did that instead. Also the bed was broken on one side. Separately, the food was kind of strange, as if the proper chef was away and had been replaced by someone who had never cooked a vegetable before in their lives.

We still really enjoyed it, and looking at other people's photographs of the place on Flickr indicates that the food isn't always like that, so I would recommend it to someone else. Plus I read two novels while I was there, which was something of a result, because I can't remember when I last finished a book.
Posted by Trish Byrne at 2:35 pm

It's a lot of hassle getting to Cuba, trust me. A lot more than getting to Sligo. The only similarity is the foreign language. ;-)

I is still sad that you won't be in Cuba, but I am glad you got to go somewhere to read some books. I must buy some books.... did I mention I was going to Cuba in ONE WEEK!!