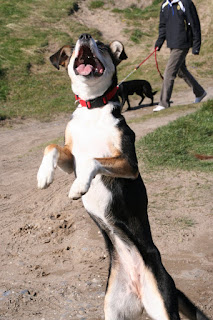 A few weeks ago Lulu became lame in one of her front legs. This necessitated a visit to the vet to ensure that she was fit for the Great Camping Trip to Derbyshire. Sadly, the vet recommended that she be left behind, in kennels, for rest, medication, and no exercise for two whole weeks. The vet suspected elbow dysplasia.

For a dog owner, the idea of dysplasia is bad news. It can mean years of medication, physical therapy, restricted exercise, arthritis, and general misery for the dog, and high vet bills for the owner.

Naturally, we wouldn't want anything like that to befall poor Lulu.

Fortunately, the x-rays we just subjected her to appear to suggest that she hasn't got it, or if she has got it, she's in the extremely early stages of it and a few months of gentle exercise could prevent it from developing. We won't know for sure until the radiologist has had a chance to look at the x-rays, and she won't be visiting for another two weeks. In the meantime, we have to proceed as if Lulu has got it.

That means that a dog who was formerly getting at least two hours of fairly vigorous exercise a day, much of it in the form of chasing a ball at high speeds and with much leaping, is now confined to three ten minute walks on the lead every day, and no more ball.

She has been home less than a week and has already eaten a book I was reading.

Except today, when she is the poorest yoke in the world, having been given a general anaesthetic by the vet. I don't know about you, but I find that when certain dogs come home after a general anaesthetic, they become tired and clingy, and don't like you to leave the room or they won't go to sleep. So instead of getting my afternoon's work done, I'm sitting in the living room with the dogs, or Lulu won't lie down, even though she looks as though she will fall down if left to her own devices.

That photo of her is very Daliesque, isn't it. Poor Lulu-le'mon.