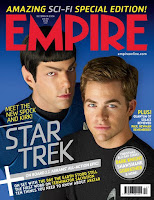 So, after looking forward to Star Trek for months and months and months, myself and Mister Monkey snuck out the other week to go and see it. Well, it kind of felt like sneaking out because we probably should have gone into the city centre to see friends, and because we drove for an hour each way to get to Liffey Valley, which contains Ireland's biggest cinema screen.

It was completely worth the hassle. The film was AWESOME. The only reason I haven't blogged about it before now is that I don't really have interesting to say about it. I just sat there with a stupid grin on my face throughout the entire thing (except for that Willy Wonka bit with Scotty, that was just kind of annoying), which was exciting and fun and kind of sexy and... well, I have one reservation. And yes, it is a bit "Trekkies Bash New Star Trek Film...", but I think it's valid. It was all a little bit gung ho, wasn't it? Just a tiny bit militaristic, maybe? The beginning, when all the cadets were getting on their different ships and they were all excited to be going out into space just seemed to be a little bit too much Starship Troopers and a little bit too little Wrath of Khan for my liking. I'm not saying I want 90 minutes of discussion about the Prime Directive in every single Trek movie, but it is that soul that has always set it apart from other sci fi, and I don't want it to get lost in among the frankly amazing action sequences and the whole, beautiful look of the thing.

Other than that, I loved it. Everything about it was bright and shiny and positive and forward-looking, and the cast was just wonderful, particularly Karl Urban as Bones. He really sets the tone for the others to follow, pitching the performance somewhere between impersonation and original interpretation. For once I even see the point of Zachary Quinto.

So yes. A resounding success. I welcome our new Trek overlords.
Posted by Trish Byrne at 9:48 pm

There was a moment in the film, when they are getting onto the Enterprise to go off to fight, when Kirk is running around looking for Lt. Ahura, and in the background for a nanosecond I thought I saw the original Lt Ahura sitting at a console. Was I imagining things? Or was it the classiest inside joke ever?