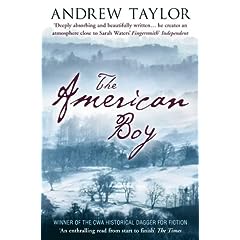 I don't usually read crime books. There has to be some special reason or gimmick, like they're set in Galway or they're written by someone I know. This year I read two crime books with gimmicks or hooks attached. The first was Michael Chabon's fine The Yiddish Policemen's Union, which is set in a fictional Alaskan present. In this fictional present, President Roosevelt's idea to have the displaced Jews of Europe come and live in Alaska was fulfilled, but they are all about to be displaced again because Sitka, which they were given as a homeland, is about to revert to being a U.S. state, and residency is not guaranteed for all. Into this complex situation comes a tired police detective, a dead heroin addict, and the world's greatest pie. It's a fine book, as you'd expect from Chabon. Heaps of atmosphere, fun, the usual American hangups with fathers, and detective work.

The second book, which I got so bogged down in that it actually took me months to read, was Andrew Taylor's DULL AS FUCK The American Boy (of course, it didn't help that every time I picked it up, the Estelle song ran around my head).

This book is set in London in 18-bippety something, not long after the Napoleonic wars and the war with America. It concerns a young school teacher who is assigned to accompany two of his young charges to London, but OH NOES! one of them is Edgar Allan Poe. DO YOU SEE?? Creepiness can only ensue. Except it doesn't really. There are a couple of murders, I don't care. There is a bit of flirting with young women, I don't care about that either. And there is rather a lot of language that, I'm sorry to tell you, I'm fairly sure is lifted from Patrick O'Brian. I know they're both old-timey and everything, but there's just something about a few of the exact phrases that seemed awfully familiar. "I tried to move, but my legs wouldn't answer," and the good old "I should like it of all things". It suffered a lot from tell-don't-show, and also from the fact that the protagonist basically does nothing, things merely happen around him that he witnesses or falls over. It's really dull. However, I understand they're planning on filming it, and it probably would look good on screen.

(By the way, Edgar Allan has absolutely no bearing on the plot at all. The whole thing is a mess.)
Posted by Trish Byrne at 6:41 pm