Some day, we will storm the Citadel 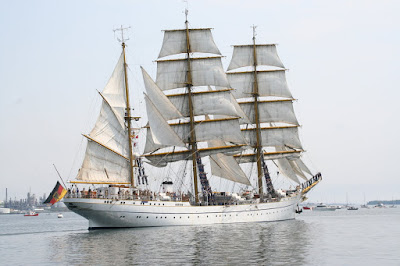 But not this time.

Because of our stupid 24 hour delay, we got into Halifax on Sunday night instead of Saturday night, and so we missed the opportunity to actually go on board the Tall Ships in Halifax when we got there. Instead, Queenie and Himself collected us at the airport and drove us to the harbour where the ships were moored for their last night in town, so we could walk around them in the gathering fog. We ate hot dogs for our dinner and held off on talk of home and catching up so that Mister M could explain the difference between ketches and sloops and I could, like I always do, pretend to be able to remember it. It was very cool, because we got to see the Pride of Baltimore II, which was a privateer in the 1812 war, and we saw The Bounty, which is, of course, a reproduction. We also saw a couple of really cool national navy training ships, one from India and one from Germany.

On Monday, which was a scorcher (sorry, Irelanders), Mister M and I managed to haul ourselves out of the apartment to watch the (fanfare) Parade of Sail, in which each of the ships gave a little tour of the harbour before leaving for Lunenberg. We could have gone down to the harbour, but it was hot and packed down there, so we stood up on the hill just below the Citadel and watched from there for a couple of hours. We had binoculars and a camera, but no hats or sunblock or water. And so the inevitable happened, which is that we got amazingly sunburned and felt dizzy and had to go and sit in a very touristy pub and drink beer and eat lobster sandwiches until we felt better.

Queenie and Himself made barbeque happen in the evening, and although it had nothing to do with ships, it was good because it felt comfortable and friendly and proper, and we met their neighbours and played washer toss, which is a little like horseshoes, but with washers and boxes of sand, and we drank beers and it just felt really good, which is just as well, because it tipped down rain most of the rest of the week. Ha ha. Serves me right for getting the Angel Gabriel to give me a good haircut, and buying a fancy hat to keep the sun off.
Posted by Trish Byrne at 11:03 pm