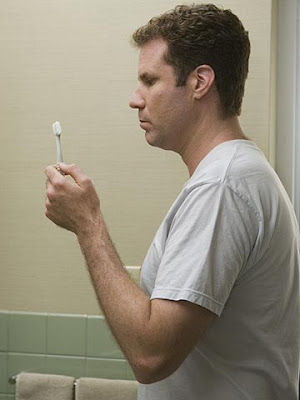 Will Ferrell is a boring man whose life is the same every single day. He is alone most of the time, but there is no real sense that he is lonely. Then things start to happen to him that could reasonably be called the beginnings of a story, and suddenly a woman's voice starts narrating his life. It's hard to know which comes first. To tell anything else about the film would be to ruin it, really.

Stranger Than Fiction got okay but not great reviews when it came out, and although I can kind of understand why--there are some bits that could maybe be trimmed from it, the wristwatch as framing device could maybe use a little tweaking and may not work for everyone, and there does seem to be some discussion about the ending--it is basically an excellent film. It's funny and sweet, beautifully shot in bizarrely utilitarian locations around Chicago, and it features some lovely quiet acting by a cast you would normally think of as being pretty hammy. It has one of those modern Brian Reitzell hand-picked soundtracks, which makes it seem a little bit like Lost in Translation at times, but without the incredibly boring bits. It's also got a lot of self-referential and post-modern stuff about the construction of stories in it, but without the kind of DO YOU SEE shiteing on of something like (oh god, how I loathe it) Shakespeare in Love.

Also it has Tony Hale in it, who I consider a mark of quality.

This goes up there as one of the lovely stories, for me anyway.
Posted by Trish Byrne at 8:27 am

And the scenes with the notebook are so sweet. It's a lovely, lovely film.