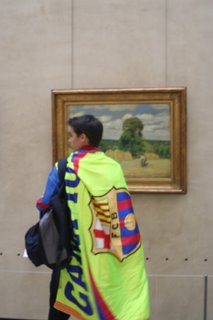 Or is it la? Monsieur Le Singe and I have decided that we need to get a bit of French polishing in before we go back again, because, for all that we both claim to be able to speak and understand French, neither of us can actually do so when the concierge lady in our apartment building is accusing us of illegal parking.

Good news: I didn't kill his mother in Paris. Sorely tempted though I may have been at several points in the holiday, I hardly betrayed my impatience at all (no, really. I'm as surprised as you are). I suspect this is partly due to the impatience being shared equally between Monsieur Le Singe and myself. A trouble shared, and all that. It's also partly due to a nice little routine which saw us dashing off for some alone time for an hour every morning*, and a handy break one evening which allowed us to go and watch The Da Vinci Code.

More good news: Going to the cinema in Paris is as lovely as ever. People do not talk during the film. When the guy behind me kicked the back of my seat and I looked round, he apologised and then didn't do it again. Nobody's phone rang.

Bad news: The movie was a bit rubbish. Also much of the dialogue is in French, which was not subtitled, and Latin, which was subtitled into French. Luckily my reading comprehension is better than my aural comprehension so I was able to figure out most of the Latin bits. Unluckily it didn't make the film any better. Also you cannot stand on the inverted pyramid at the Louvre, so re-enacting key scenes from the film was out of the question. Bah.

Bad news: The Champions' League final was on while we were there, which meant that the city was covered for two days in shouty Barca supporters. They were kind of annoying, although they did lend a certain something to the Musee D'Orsay.

Bad news: It costs a lot of money to go around Paris on tour buses - the only way the mother-in-law could realistically get anywhere, given the inability to walk or go on escalators or be in confined spaces - and it can be frustrating when it takes you an hour and a half to get somewhere you could have got in twenty minutes by walking.

Good news: We're going again in the winter. On our own.

*To a cafe! For a croissant and creme! Honestly, some people.
Posted by Trish Byrne at 1:56 pm