To conclude with a rendition of Bohemian Rhapsody in full chorus 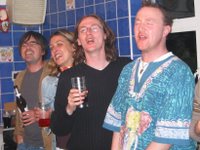 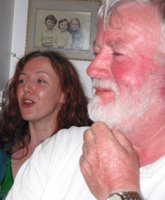 I can't believe I've posted nothing for nearly a month. And that I'd get the urge to post today, of all days, with all the shit that's going on in London. I suppose it's the urge to do something combined with the lack of ability to do anything useful. It's probably also that fear for family's safety followed by relief at safety of family.

Anyway, last Sunday marked the birthday of our matriarch and we had a huge party. It was top fun. These are the only photos I took, though.
Original comments
Hmmm, what's that I see on the wall in the background of photo 2?
Posted by Ray on Jul. 07 2005, at 2:49 PM
How come Keith never wears that shirt to work?
Posted by Dave on Jul. 07 2005, at 3:13 PM
Ray: Ickle baby Byrnes!

Dave: Because that shirt still hangs in the "goodwear" section of the wardrobe. Next Christmas, when he gets a new shirt, it will be relegated.
Posted by perfectlycromulent on Jul. 07 2005, at 3:23 PM
On further inspection of the group photo, it's funny how Keith is inspecting his feet as people do during the second verse of hymns or during the national anthem. Even after four years in this family, HE DOES NOT KNOW THE WORDS!
Posted by perfectlycromulent on Jul. 07 2005, at 3:25 PM
Oh I know the words all right. I just don't think it would be politic to tell the in laws that I don't really like Queen.
Posted by watchdog on Jul. 10 2005, at 7:36 PM
They're not in-laws yet, and if there are any more revelations like that...
Posted by Ray on Jul. 10 2005, at 9:29 PM
Posted by Trish Byrne at 2:48 pm